Texas Gets Another Giant Armadillo

A 30-foot-long armadillo, which for the last few years has occupied a rich person’s lawn in Vermont, has returned to Texas. 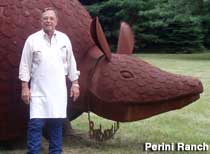 The homecoming was a bit of Lone Star serendipity. Tom Perini runs the Perini Ranch steak house in Buffalo Gap, Texas, which caters elite private parties around the world (George W. Bush is one of his clients). This past fall he was invited to Vermont by a woman who had purchased the armadillo from a Texan sculptor a half-dozen years ago. The woman named the creature “Barbadilla,” after herself, and put it in a manicured meadow.

“Folks out there had thought it was some kind of prehistoric something,” Tom told us. “She just told me to, ‘Come up with your trucks and pick it up.’ She wanted me to take this back to Texas where it belongs.”

The one condition given by the woman was that the statue keep its “Barbadilla” necklace and name. 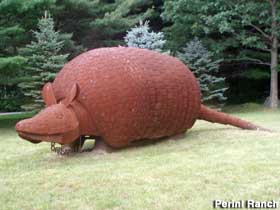 Unlike this demon-possessed giant in Houston, Barbadilla is true to life, although enlarged to a scale roughly 12 times normal size. It’s made of “old tank steel,” according to Tom, who is impressed by the amount of care that the sculptor put into it. “It’s not just a tank with a tail and a head.” Tom equates Barbadilla to the size of an Airstream travel trailer.

“We originally though we’d just turn it upside down, because that’s the way most people in Texas see armadillos,” Tom told us. But some people who’ve seen Barbadilla on the Perini Ranch have thought that it’s just a giant bar-be-que for the steak house. Tom now plans to donate it to Buffalo Gap to be displayed in a local park next to the highway.

“Buffalo Gap is a little bitty town of about 460 people,” according to Tom. “Ask anybody where the big armadillo is, and they’ll know it.”

[Note: There are at least two more giant armadillo sculptures in Texas — we’ve seen one north of San Antonio at the entrance of a flea market, and one in Arlington in 2002.]

Sections: Attraction News, Statues Comments Off on Texas Gets Another Giant Armadillo

3002 FM 89, Buffalo Gap, TX
Directions:
Southwest of town. Take FM 89 west out of town for one mile, then turn right into the parking lot for the Perini Ranch Steakhouse. Barbadilla will be standing next to the entry road.
Phone:
325-572-3339
RA Rates:
Worth a Detour