During World War II, Texas was home to more than 70 POW camps, with over 50,000 prisoners. One out of every ten of those POWs was behind barbed wire at Camp Hearne, a small prisoner-city in an otherwise empty part of the state. Abandoned after the war, it remained a wasteland until now, with the opening of the Camp Hearne Museum in a newly-built replica of one of its barracks. 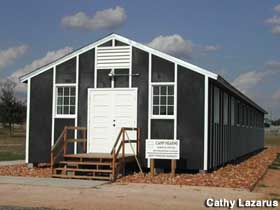 Camp Hearne’s POWs were mostly German officers from the Afrika Corps, including Field Marshal Rommel’s personal orchestra, who were permitted to keep their instruments. The prisoners remodeled one of their buildings into a theater, with stadium seats and an orchestra pit. Its ruins can still be seen. From the abundance of arts-and-crafts exhibits at the Museum, one gets the sense that the long, hot Texas days passed quietly at Camp Hearne.

“We do have one knife, a rather nasty-looking sucker,” said Cathy Lazarus, president of the organization that built the museum. “A few of the Germans escaped, but most of them learned to come back because there’s nowhere to go.” 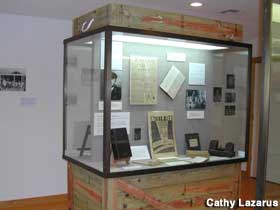 What remains of the camp covers about 80 acres, according to Cathy, most of it still overgrown. “We had so much cement out there, nobody ever wanted to go in and tear it up and haul it away.” Visitors are free to explore what remains, both cleared and wooded, although Cathy called the uncleared areas “awfully rough” and urged any explorers to wear long pants and protective shoes (There are plans to eventually cut trails through the whole camp and rebuild one of the guard towers).

What about the POWs who escaped and didn’t have the sense to come back? “Some of them made the mistake of trying to go down the Brazos River,” said Cathy. “If you know the area, that’s the one river you don’t want to go down.”

Fairground Rd, Hearne, TX
Directions:
Northwest of town. Drive north out of Hearne for one mile, then turn left (west) onto FM 485. Drive one mile, then turn left at the green highway sign toward the fairgrounds. The open space of the camp, with its new museum barracks, is on the right.
Hours:
W-Sa 11 am - 4 pm for museum, daylight hours for camp (Call to verify) Local health policies may affect hours and access.
Phone:
979-814-0733
Admission:
Donation.