The Ledge: 1353 Feet Straight Down 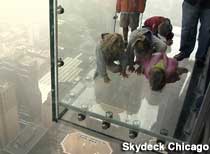 It’s been two weeks since “The Ledge” opened in Chicago, a lofty tourist sensation that seems to have taken a page from the Indians’ playbook (see Grand Canyon Skywalk). The Ledge is in fact a set of three ledges that jut from the west face of the 103rd floor of the Willis Tower (formerly known as the Sears Tower).

The ledges are not really ledges, either, but are boxes made of clear, tempered, laminated glass. Visitors can step out from the Tower, into the boxes, and look straight down between their feet, 1353 feet, to the busy streets far below.

We asked Randy Stancik, the general manager of Skydeck Chicago (which is what the 103rd floor is called) what he’s learned in two weeks about ledge behavior.

“Lots of people like to sit down,” he said. “People love to put their faces on the glass, looking down. Or do push-ups. Or lay with their arms and legs out like a superhero. One girl did a handstand.”

Randy added that, “I have yet to have anybody throw up or faint, and I’m very proud of that.”

People can wear their shoes while on The Ledge, unlike at the Grand Canyon Skywalk, which makes its visitors don protective booties. Each ledge, according to Randy, has an extra, top layer of floor glass that can be removed and replaced, “like a tablecloth,” if it gets scratched.

We asked Randy if the success of the Skywalk, an engineering marvel, had prompted the creation of The Ledge. He said that while he admired the Skywalk, “you take many steps [there], and there’s panic sometimes. Here you take two steps, and then you can get out.”

The real inspiration for creating The Ledge, according to Randy, was “cleaning all of the forehead prints off of the windows.”

“We’ve always had four great views: north, south, east, and west,” he said. “But the one that they were trying to get was the fifth one. Down.”

Sections: Attraction News Comments Off on The Ledge: 1353 Feet Straight Down