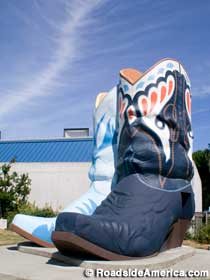 Lovers of down home colossal kitsch are kicking up their heels upon receiving news that the restoration of Seattle’s iconic Hat ‘n’ Boots is nearing completion. The well-loved, once derelict Western Wear trio is all spruced up and ready to serve as the centerpiece of Oxbow Park in suburban Georgetown. A few more coats of paint will be applied (“when weather permits” in Washington State’s rainy climate) and then Hat ‘n’ Boots’ decades-long saga of triumph, ruin, and redemption will finally have its happy ending.

Hat ‘n’ Boots was originally built in 1954 to serve as a novelty gas station. With its All-American pairing of gun-slinging and gas-guzzling, the eye-catching icon was intended to be part of a two million dollar cowboy-themed shopping center called Frontier Village, but that failed to pan out. Hat ‘n’ Boots then entered its heyday as the “Premium Tex” gas station, where attendants sported spiffy cowboy outfits. The hat shielded the pump station; the boots housed well-heeled restrooms.

By 1988 drivers had their fill of “Premium Tex”—construction of a new nearby Interstate Highway didn’t help matters. The pioneering petrol provider closed down. 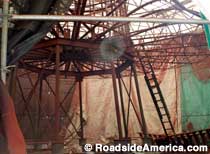 Hat ‘n’ Boots began an era of neglect, its former plaster-and-chicken-wire grandeur (far less sturdy than those pyramids over in Egypt) beaten down by harsh weather and enterprising skateboarders fond of riding along its brim. But fans would not be thwarted and with can-do spirit and grant application genius they began a campaign to save the landmark, which took over two decades to pull off.

In 2002, the Georgetown Community Council bought it for $1 and the next year it was moved a few blocks north to its current location, a block-wide lot between a light industry and residential area. Nostalgia for 1950’s-style norms didn’t stand in the way of lead paint and asbestos abatement, and then a through rebuilding and repainting job could begin. The “Rise and Fall and Rise Again” of the Hat ‘n’ Boots was on its way!

Next on the agenda: Will someone please cough up the buckaroos to save Tex Randall? He’s the 47-foot-tall giant cowboy of Canyon, Texas. If no one moves him soon, the sun will set on his looming and leaning presence. Any and all offers will be considered, although the current owner wants nothing to do with PETA’s offer to lease him and turn him into a spokes-statue for their anti-leather campaign.

6430 Carleton Ave. S., Seattle, WA
Directions:
I-5 exit 162 onto Corson Ave,, then south a half-mile. On the left, in a little park midway between S. Eddy and S. Warsaw Sts, across from the Dept. of Transportation maintenance shops.
RA Rates:
Major Fun