‘Tis The Season For Dark Art

It may be simplistic to describe two unrelated new, all-black, public outdoor artworks as creepy — but they are, and they’ve arrived just in time for Halloween. They are Non-Sign II and Geometric Death Frequency-141. The publicity pix of both look like outtakes from a nanomachine snack attack in some end-of-world sci-fi movie. 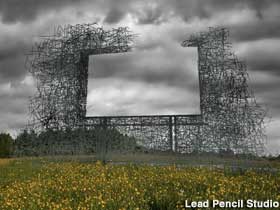 Of the two, Non-Sign II is perhaps not as disturbing as its digital rendering suggests. The idea is clever: a webbing of black metal forming the rectangular outline of a billboard filled with nothing but air.

It’s meant to call attention to the superabundance of signs at the U.S.-Canadian border crossing at Blaine, Washington (near the Peace Arch). But early reports suggest that the artwork may actually be invisible — lost among all the real signs — and that all of the security and border traffic means that there’s no place to pull off and take a picture of it even if you could see it. 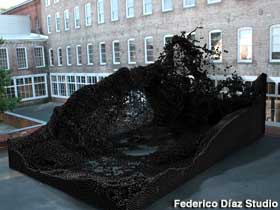 Geometric Death Frequency-141 is described in its press release as “a sculpture completely untouched by human hands.” It’s made of 420,000 black balls in the entrance courtyard of the Massachusetts Museum of Contemporary Art in North Adams — built by “robotic machines” under the guidance of an artist from Prague.

A digital photo of the courtyard was “deconstructed” by the artist into pixel-balls, then assembled by the robots into a sculpture of ink-black liquid frozen in mid-splash within an invisible 50 x 20-foot tank, placed within the original courtyard. The artist called its creation “a fascinating journey full of unforgettable emotions.”

Geometric Death will be up only until April 2011.

Sections: Statues, Trends Comments Off on ‘Tis The Season For Dark Art