The attraction vortices of Branson, Missouri, and Pigeon Forge, Tennessee, have their cultural critics. But without them — landlocked meccas of God, Elvis, the flag, and toilet seat guitars — America would be without what are now its two largest Titanic museums, housed in lookalike giant replicas of one-half of the doomed luxury ocean liner.

(Serious New England has for years had its own, much less flashy though eclectic Titanic Museum.) 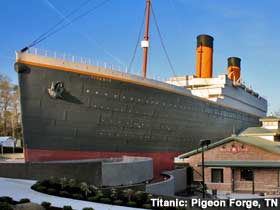 A second “Titanic: World’s Largest Museum Attraction” has opened in Pigeon Forge, and for all practical purposes it’s identical to the one in Branson (they were built by the same company). Outside, a simulated iceberg sits in a pool of water, piercing the hull. Inside, actors in period costumes roam the ship, dispensing tidbits of information and lots of role-playing verve. Actual [salvaged Titanic] artifacts are scarce [as would be expected], but interactivity abounds: you get to touch a wall of ice, sit in a lifeboat, and stand on a sloping deck. At the end, you find out whether you lived or died, and odds are you’re dead.

We’re not sure what the presence of the Titanic in Branson and Pigeon Forge means. Both towns and their demanding audiences have broken the spirits and spines of countless earlier entertainment vessels (Johnny Cash, Anita Bryant, rock and roll, etc. etc.).  But maybe this Vegas-style monolith has just the right mix of doom, drama, history and kitsch to please the Smoky Mountains like it has Branson.

And if wildly successful in Pigeon Forge, can we expect to see 1/4 size Titanics opening up in every mall parking lot in America?