“If you don’t believe in the devil,” said Horace Burgess, “you can look at that rock right there and tell that he’s much alive.” 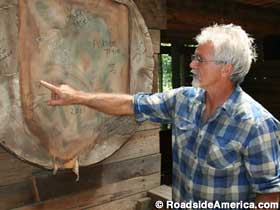 Horace is the builder of the Minister’s Tree House — largest in the world — and the rock that he mentioned hangs in the choir loft of the tree house chapel.

“I was putting all these rocks in a path,” said Horace, a landscaper, “and there was only one left on my trailer, and I was just praying that I wouldn’t die ’cause I’d worked so hard that day. And the spirit of God said, ‘You’ve always wondered how it looked when I created the world? There’s a picture of Me in that rock behind you.'”

Horace saved the flattened rock and framed it with a wagon wheel and some deerskin. “There’s not even a line out of place,” he said. “You can see His eyelids, and His nose, and His lips, and His chin, and then His robe just flows around it all. He’s got the world in His hands, all the way down to His thumbnails; see ’em right here? And the world’s all spinning and He’s putting all the precious stuff in the middle, the oil and stuff.”

Visitors may have to take Horace at his word. The image in the rock is obscured by graffiti and paint, vandalized by those who’ve been tricked by the devil, according to Horace. “But they can’t destroy it,” he said. “All I have to do is sandblast it. It’s got the pattern right through the rock.”

More on The Minister's Tree House

One Response to “Tree House Rock: Face of the Creator”