Turn Off, Tune In, Drop By

Luckenbach, Texas was never a bustling metropolis. In 1904, its population peaked at a far-from-astounding 492. And by the 1960’s, Luckenbach was three citizens short of being a complete ghost town. Then, in 1970, a group of friends (Hondo Crouch, Guich Koock, and the normal-named Kathy Morgan) bought the entire kit and kaboodle for $30,000 in and began a tradition of outdoor jamming, beer drinking, and the celebration of inventive festivals such as “Hug-Ins” and “Chili-Busts.”

The rise of Luckenbach as a country music mecca was assured when Waylon Jennings and Willie Nelson released the song “Luckenbach, Texas (Back to the Basics of Love)” which hit #1 on the country charts in 1977.

Decades later, Luckenbach still draws tourists from around the world to this dusty destination in the middle of nowhere. There are only two buildings: a bar/general store and a dance hall. There’s an outdoor stage and an outlaw-lite vibe. You may have trouble finding the town due to an on-going problem with renegade sign stealing. For a tiny town, they have a pretty elaborate website.

Being mentioned in a song lyric is not a surefire guarantee of tourism traffic, however. First off, the reference must be specific. No one seeks to re-enact By The Time I Get To Phoenix or Do You Know The Way to San Jose? (And we hope Johnny Cash fans refrain from killing a man somewhere in Reno just to watch him die—much better to visit the Folsom Prison Museum.) 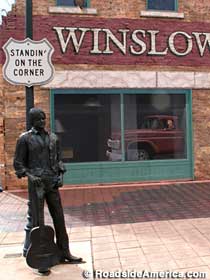 An endless stream of soft-rock aficionados pose “standing on a corner in Winslow, Arizona” — as crooned in the Eagles Take It Easy.  An amusing and clear-cut photo op is essential and the town has obliged with “Standing on the Corner” Park.

All lyrical genres can prompt otherwise rational people to travel far out of their way to far-from-scenic destinations. Fans of quirky, super-literate indie rockers The Decemberists regularly make pilgrimages to the bike racks at Orange Street Food Farm in Missoula, Montana (as mentioned in Apology Song). But don’t go wandering around rural Georgia looking for the B-52’s Love Shack — it burned down in 2004.

You don’t even need a “real” place to attract a real crowd. People have been flocking to the Hotel California in Todos Santos for years, despite the fact that Don Henley has stated flatly that he never stepped foot in the joint. [Post by Anne D. Bernstein]

Sections: Places, Rants, Trends Comments Off on Turn Off, Tune In, Drop By