We’ve watched with resignation the gradual decay of the Twin Arrows east of Flagstaff, Arizona. The two big shafts — telephone poles, actually — were left to rot when the trading post that owned them closed in 1998. It wouldn’t be long, we thought, before they collapsed in a puff of desert dust, and then were moved to our Gone But Not Forgotten section. 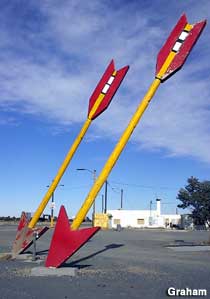 But not so fast! The arrows are reborn, looking as colorful and strange as the day that they were first shoved into the ground.

The arrows were restored in a two-week cooperative blitz between the Hopi tribe and Route 66 buffs. Each group had its own motives. To the Hopi, according to an article in the Arizona Daily Sun, the arrows “symbolize warrior pride.” To the 66ers, they embody “an entrepreneurial spirit.” Let’s just say that the arrows are a Spirit Guide for Route 66 travelers, and a big “Pay attention!” from Arizona’s Indians.

According to the Sun, the Hopi plan to restore the trading post as well as the arrows, in anticipation of a big Navajo casino planned for the opposite side of I-40. We hope that the tribes put some of their future wealth to further totem rehab  — like restoring Two Guns/Canyon Diablo a dozen miles east of Twin Arrows.

Old Route 66, Twin Arrows, AZ
Directions:
Exit 219 off of eastbound I-40. A concrete barrier blocks access directly in front of the ruins, but drive a little further east and the barrier ends. Then you can pull off and park, and walk back on the safe inner side.