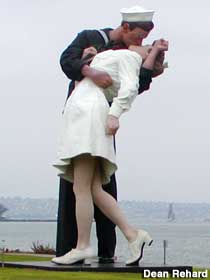 And people in San Diego were just getting used to the World’s Largest Random Embrace. A brief news item on Florida news station WWSB claims that Sarasota, FL’s city commissioners have welcomed a return east to the city of the towering sailor – smooching – nurse statue.

“Unconditional Surrender,” by artist Seward Johnson, is a 26-ft. tall recreation of a famous photograph from World War II’s V-J Day celebration in Times Square. Nazis defeated, Japs down for the count! A nameless serviceman dipped an unknown nurse for a victory kiss.

It was loathed by Sarasota’s public art advisory committee when it was erected in 2005. The statue was called tacky, unsafe (it was claimed that gawking motorists would cause traffic accidents), and immoral (a view that the artist had merely copied the photographer’s work). When the statue was dismantled in the Spring of 2006, an ugly rumor spread that it had been bought by a chain of Canadian pizzerias.

Instead, it wound up in Navy-crazy San Diego — fitting in comfortably in a public park along the waterfront, an aircraft carrier as backdrop.

The people of Sarasota, however, love the statue and want it back. According to the news report, a local non-profit has raised enough money to have the statue shipped to back Sarasota, and the commissioners have invited the artist and Unconditional Surrender to return. Suggestions are being taken for a place to put the statue, preferably one that won’t cause unconditional fender-benders.

More on this attraction