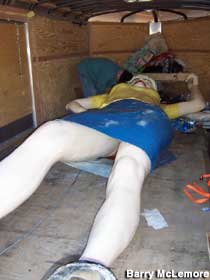 Collector-of-giants George Farnham has finally added a long sought prize to his assembly of fiberglass statues — a Uniroyal Gal. He and wife Pam emphasized their interest in that rare model of Muffler Man when we’d loitered around Casa Farnham in Unger, West Virginia in 2005. So we kept an eye out (in sort of a lazy, spirit guide way).

Since then, we’d forwarded a lead to George about a Big John grocery clerk in Illinois — he bought it. Then we tipped him about a Santa Claus statue in Texas — he grabbed it. But no Uniroyal Gal, a perky, usually mini-skirted Jackie Kennedy knockoff, presented itself for adoption….

In Dec. 2007, we heard from Barry McLemore regarding the seasonal fireworks Gal around Byram, MS — last seen face up in a weedy lot. Barry purchased it from the owner, but had nowhere to put the statue, so he was keen to find a buyer. The Farnham collection seemed like the logical group home for her, so we tipped off George.

The Uniroyal Gal will join the line of giants on his property, close to his newly acquired roller coaster, purchased from Williams Grove Park in Mechanicsburg, PA (and originally part of Fantasy Farm, Middletown, PA). It features a 165 ft. oval track and five cars (nice, and we had absolutely nothing to do with that find). George reports; “I swore to Pam, the [insurance company], and the Morgan County planning commission that I would not operate it.”

Barry sent us a revealing photo of the statue, prone in a trailer, before it was whisked from Mississippi to West Virginia.