What’s That Up Ahead? SlotZilla and Pole-Licker Flick

We officially enter the teens of the 21st century with the enthusiasm of college sophomores on their first road trip and the tempered caution of Dad steering Mom, Bud, and Sis through a rattlesnake ranch. 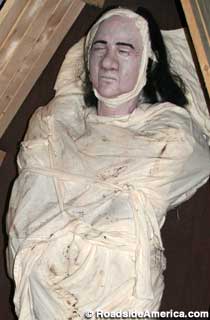 A number of attractions currently in mothballs are slated to return in 2013, among them the Giant Transformer Robot of Pittsburgh, the Unconditional Surrender statue of San Diego, and the World’s Largest Pair of Drumsticks in Ohio. The Cake Museum and Presidential Pet Museum are scheduled to reopen, as is the World’s Largest Light Bulb tower, shuttered since the 1990s.

There’s still no clue as to when Kickstarter-funded darlings such as the Robocop statue in Detroit and the Tesla Museum of Long Island might appear. Robocop really should arrive some time this year, but there probably aren’t laws to mete out prompt robot-justice to heel-dragging kickstarters.

Anniversaries? Harold Warp’s Pioneer Village — a five-Smiley roadside wonder — turns 60 in 2013, the World’s Oldest Time Capsule turns 75 (only 4,925 years until it’s opened), and General Sickles’ blown-off Civil War leg bone will celebrate its sesquicentennial (150th birthday) at the National Museum of Health and Medicine. April 3rd will mark 500 years since Ponce de Leon first set foot in Florida; his Fountain of Youth still hasn’t delivered as advertised (that we know of) but bold, de Leon-esque claims are a legacy of some of the Sunshine State’s most memorable attractions. 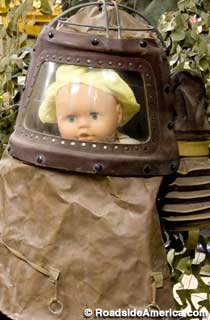 Notable destinations to debut in 2013 include the Rocky Flats Cold War Museum in Colorado, the Lee Harvey Oswald House in Texas, the Bourbon Visitor Center in Louisville (with its five-story tall liquor bottle), and the San Francisco-Oakland Bay Bridge — which in March is scheduled to be transformed into the world’s largest permanent LED light show.

Many new, Roadside-worthy sculptures have appeared in recent years, and it’s impossible to know all of the outdoor creations that will debut in 2013, but one that we look forward to this year is Hammond, Indiana’s statue of the hapless Flick from A Christmas Story, forever in bronze with his tongue stuck to a pole.

Finally, we admit to being curious-despite-the-hype about “SlotZilla,” scheduled to debut in June in Las Vegas. It’s a zip line, but it’s being strung 11-stories-high above downtown Fremont Street, and its riders will actually slide down through a “slot” cut into the canopy of the multimedia Fremont Street Experience.

If you’d asked us a year ago what to expect in 2012, we’d have missed many full-of-awesomeness sights that have debuted over the past 12 months. It’s a huge continent, there are always unexpected things to see, and that’s what makes it fun to get into a car and drive.

Sections: Attraction News, Coming Soon, Tourism News Comments Off on What’s That Up Ahead? SlotZilla and Pole-Licker Flick