The Upside of Upside-Down 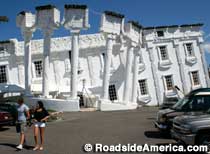 With Election 2008 upon us, we decided to feature the future home of the next US President as Sight of the Week. But what the — ? The White House has been scooped up, whisked to Wisconsin Dells, and dropped like something with toxic cooties. What evil force could be responsible?

Top Secret Inc, in addition to defying gravity, appears to defy odds that normally pummel a “concept” attraction out-of-business after a few seasons in the competitive torrent of the Dells. Yet here it stands…

Top Secret does offers a great free photo op exterior, and the interior ain’t bad…. bigger and more involved than we’d suspected. And taking the upside-down idea to new extremes.

There’s an Upside-Down House in Lee Vining, CA. The Wonderworks arcade franchise added its own dropped-on-their-heads buildings to the skylines of tourist meccas, such as Orlando and Sevierville (near Pigeon Forge).

There was even a popular tourist attraction called the Upside-Down House, in Sunrise Golf Village, FL. Long since demolished (but the postcard lives on).

Seems like when it comes to upside-down, you can’t really go wrong.

Sections: Places Comments Off on The Upside of Upside-Down