Two visionary women want to transform a sleepy region of upstate New York into a tourist destination known as “The Valley of the Giants.” 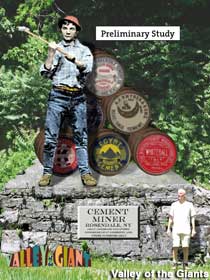 The project is captained by Maria Reidelbach, who built a 13-foot-tall garden gnome in the Rondout Valley in 2006, and Lisa Kellogg, who bills herself as a “success coach.”

The idea is to dot the valley, from Ellenville to Kingston, with over a dozen different big statues that are “unique and meaningful” to each town, according to the project’s web site. A map of the valley shows 14 possible Giants, which include a dinosaur, a cow, a Ukrainian, and lots of half-human fruits and vegetables.

The mad science of massing many giants to multiply their power is already underway in places such as The Enchanted Highway in North Dakota and the Roadside Giants Project in Pennsylvania. Unlike those two, however, The Valley of the Giants intends to populate an entire geographic area, not just a single road.

Reidelbach and Kellogg have reassured nervous residents, telling them that the “giants” won’t be Jolly Green Giant gigantic at all. They’ll be 15 feet high, tops, tastefully designed and painted, and made of respectable concrete, not garish fiberglass. They’ll be enticing for tourists, but still easy to ignore for locals.

Much of the project’s success may hinge on public reaction to its second statue (if you count the gnome as #1), which will be a big cement miner, scheduled to go up in Rosendale in 2012. Conceptual drawings show it to be indeed tastefully rendered, and not so large as to offend the aesthetes.

We hope that the peaceful vibes spread by the valley’s early giants will mute later resistance — when Reidelbach and Kellogg unveil their humongous humanoid pickle and potato.

One Response to “Valley Of The Giants: Empire State Big”