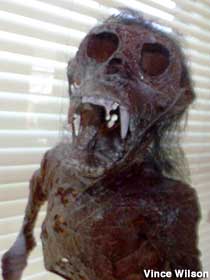 That conviction is one of the reasons why Vince lives where he does — inside the National Paranormal History Museum. Known locally as “The Haunted Cottage,” it’s also home to at least four ghosts. According to Vince, you can’t find those kinds of amenities just anywhere.

Vince is a certified scientific researcher of the paranormal. The ghosts in the museum, he says, are entities that took him 11 years of dogged investigation to distinguish, although it helped that he could work from home.

Vince understands that tales of all-nighters where nothing much happened don’t make a very satisfying walk-through museum experience, particularly to a Ghost Hunters generation expecting instant gratification. Rather than salt his museum with orb pictures (which he doesn’t believe in) or Ghostbusters dummies wearing Proton Packs, he’s turned the second floor of the museum into an “exhibit of the supernatural” — a showcase for the most visually punchy examples of unexplained phenomena that he can find. 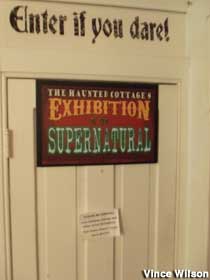 There’s a cast of a Bigfoot footprint and a full size silhouette of the Mothman, a monkey’s paw and an elongated Peruvian skull, the skeleton of a two-headed frog and a genuine Jivaroan shrunken head. A Fiji Mermaid shares space with a space alien locked in a box labeled “Area 51.” There’s a “Hand of Glory” — the severed hand of a murderer, coated in wax — with its fingertips blackened from evil rituals, and a full size vampire skeleton with fanged incisors and a stake through its ribcage to prevent revivification.

Vince may not believe in all of these things, but he believes that showing them is a good way to introduce the broad field of neo-science to the general public. He hopes that the exhibits will inspire some of his visitors to come back for a “haunted overnight” at the museum, or participate in a full-blown ghost tour investigation on the weekends. “We’ll teach them things they don’t learn on the ghost hunting shows,” he said, then invited everyone to the museum’s annual Halloween séance where they’ll try to contact Houdini.

Directions:
Haunted Cottage. From the river bridge on the southeast side of Harpers Ferry, drive west 1 mile on US 340. Turn left (south) onto Washington/Shenandoah St., then quickly turn right onto Campground Rd. Just before the KOA campground, turn right onto Old Taylor Lane. Booth House is on the left.
Hours:
July 2014: Reported closed by owner.
Status:
Closed