Trolls don’t get much respect, even on their best days. Now the giant Fremont Troll in Seattle, Washington, has suffered the indignity of being painted by vandals. 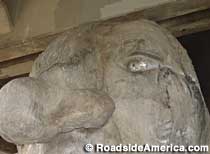 A couple of weeks ago, the troll was sprayed with fingernails, tattoos, fangs, and a green eye. Volunteers from the Fremont Arts Council got together and quickly restored the troll, but noted that “paint can’t be removed” and that the only way to repair the troll was to slather “a fresh layer of concrete over the top.” Comparing old photos of the troll to newer ones reveal its gradual blobification, no doubt  the result of repeated, similar repairs over the years.

Those who attacked the Fremont Troll failed to notice that it’s crushing a car in its left hand, and they probably weren’t aware that trolls freeze in place whenever you look at them. We’d love to return to this place under the bridge and find the frozen troll squeezing a handful of startled vandals. Slathering concrete over the whole mess would be a pleasing permanent addition.

More on The Fremont Troll