« U.S. May Lose Friendship Monument to Mexico | Main | Quan Am Smiles Upon Tulsa » 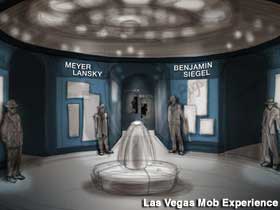 It’s showtime for the first of 2011’s two Sin City organized crime museums: The Las Vegas Mob Experience at the Tropicana Hotel. Built at a reported cost of $25 million, it beat out the better-publicized Mob Museum, which is slated to open in the old downtown Las Vegas federal courthouse later this year.

At The Las Vegas Mob Experience, visitors pay $40 to become mobsters, walking through series of full-room dioramas that take them through the history of U.S. organized crime. Each visitor wears a custom-encoded RFID badge and chooses their own life-size hologram guide, played by some of Hollywood’s better-known gangster actors — James Caan, Mickey Rourke, Frank Vincent — who address them by name, and speak in their native language. Each stop on the tour requires a decision: should you deliver the cash or steal it; whack or be whacked? Live, un-famous actors, sprinkled throughout, help with the dirty work and add the appropriate level of fear and chaos that you’d find in other funhouse-style attractions. 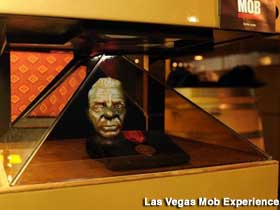 (Like the free cheese samples and roller-skating-employees at supermarket grand openings, the bells and whistles of The Las Vegas Mob Experience may disappear or break over time, so it’s best to visit soon, while everything still works and they’re still paying the actors.)

Unlike the Mob Museum, The Las Vegas Mob Experience reached out to the families of former gangsters (their real families, not mob families) and received hundreds of personal items to display. These include baby shoes, love letters, gangster Meyer Lansky’s Medal of Freedom, an ashtray stolen by a mobster from Elvis Presley’s Las Vegas hotel suite, and the ignition keys of a car blown up in a mob hit.

The multiple options available at The Las Vegas Mob Experience ensures that each trip through is different (and encourages return visits). For the price of admission, however, you’ll want to go for the gore: tell the actor-enforcer to beat the casino cheat with the baseball bat, and get yourself caught in a the gun battle at the end.

Directions:
In the old convention space at the Tropicana Las Vegas, which is on The Strip at the southeast corner of E. Tropicana Ave. and Las Vegas Boulevard S.
Hours:
Closed: Oct. 2011 (Call to verify)
Phone:
702-739-2662
Admission:
$25
Status:
Gone