Welcome Back Velveteria, The Museum Of Velvet Art 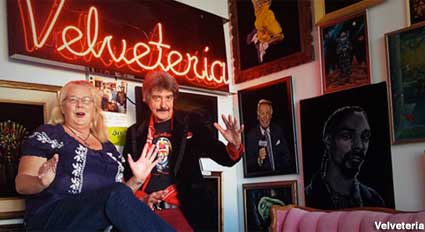 The world’s most wonderful museum of velvet paintings, Velveteria was for years the cultural apex of the weird art scene in Portland, Oregon. But founders Carl Baldwin and Caren Anderson closed in early 2010, packed their 3,000+ paintings into five trucks, and headed to southern California, exact destination unknown.

“I wanted to sit on a beach after all those rainy years in Portland,” said Carl. He and Caren looked into reopening Velveteria in Palm Springs (“But the summer’s too brutal,” Carl said), Santa Barbara (“It’s beautiful there, but kinda snooty”), and Hollywood (“It’s magnet for every nutcase in the world”).

Then Carl had an epiphany. “I said, ‘We don’t want to be on the outskirts. We want to be in the center of everything.'” So he and Caren looked in the old downtown section of the city, and fell in love with an empty Chinatown building that appealed to their DIY spirit. “It hadn’t been open for years, there was a dead rat on the floor, there was goose grease on the ceiling from the restaurant that was there 30 years ago,” said Carl. “We said, ‘This is perfect.'”

After much cleaning and remodeling, Velveteria reopened on December 11, 2013, to a world that had certainly missed it.

The new Velveteria, in addition to its main gallery, has theme spaces such as a Black Light Room, a Naked Lady Room (with pink walls), the Hall of Elvis, and a Secret Room that can be unlocked on request and whose art must remain a mystery (One of its paintings is of Anderson Cooper in a thong). The Velvet Heaven gallery features portraits of dead celebrities, while The Unicorn Garden of Good and Evil contrasts pink and white unicorns on one side with all-black “Evil-corns” on the other. “We’ve added a lot,” said Carl, who guessed the number of paintings displayed at 420. “That’s one of the reasons why we had to reopen.”

Carl also dropped a surprising bombshell: every visitor to the new Velveteria can, for a sliding fee, order his or her own custom velvet painting. “I’ve got artists all over,” said Carl. “Give us a picture, any image. We can get it put on velvet for you.”

Probably no artist’s vision can top Velveteria’s portraits of Bat Boy or of Marshall “Heaven’s Gate” Applewhite, but you may want to give it some thought before you visit.

Directions:
Chinatown. On the west side of New High St. just north of Ord St., and a block east of N. Broadway. Close to US Hwy 101/Santa Ana Fwy exits 2A and 2B.
Hours:
2020-21: Reported closed.
Status:
Closed

2 Responses to “Welcome Back Velveteria, The Museum Of Velvet Art”