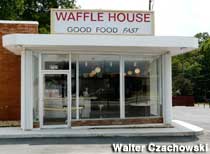 The Waffle House Museum, built inside the chain’s first 1955 restaurant outside of Atlanta, Georgia in Decatur, opened in 2008. The museum has been both a temptation and a frustration for Waffle House fans, because its doors have usually been locked.

That will start to change on March 20, when the museum will open to all who want to learn the history of Waffle House coffee and smothered hash browns.

“It’s not some special day in Waffle House history,” said Kelly Thrasher, PR spokeswoman and Waffle House Museum tour guide. “We wanted to open up at least one weekend day a month, so that people don’t have to make an appointment.”

Restrictions on appointments — limiting days and tour group sizes — have also been eased, according to Kelly. Visitors who call at least 48 hours in advance now have a good chance of getting a tour, escorted by someone who drives over from the corporate office, 30 minutes away. “We don’t want to turn anyone away if we can help it,” said Kelly. “We just don’t have the staff right now to keep the place open regularly.”

Kelly said that the museum has lured both savvy Waffle House heritage buffs and innocent folks who just want Waffle House food. “We have had people who walked in looking for breakfast,” Kelly said. “We send them to a Waffle House down the street. Some of the replica food does look pretty real.”

2719 E. College Ave., Decatur, GA
Directions:
East edge of the city, on the south side of US Hwy 278/E. College Ave., a block east of its intersection with Arcadia Ave.
Hours:
W-Th by appt. Call at least 1 wk in advance. (Call to verify) Local health policies may affect hours and access.
Phone:
770-326-7086
Admission:
Free
RA Rates:
Worth a Detour

One Response to “Waffle House Museum: Satisfy The Hunger”