« When A Monster Is Not A Monster | Main | High Caliber Politics In Kentucky: Hitler Plaque, Assassination Relics »

Preserving Our American Right To Walk Through A Tree

Before there were even automobiles, there were holes hacked through the center of California‘s giant sequoias. One of the first was the California Tunnel Tree, now part of the Mariposa Grove in Yosemite National Park. It’s been a magnet for tree-bisecting tourists since 1895. 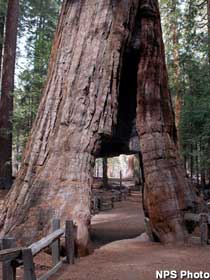 Yosemite and the surrounding sequoias profited early from the Tunnel Tree, which raised their status to the point where they became a National Park. But the relationship has since become awkward, and it was with this in mind that we read, with concern, the new Draft Environmental Impact Statement put out by Yosemite. It describes plans to reroute the trail to the Tunnel Tree into an “overlook,” and to eliminate the nearby parking lot (The tree has been walk-thru-only for many years).

The vague language of the plan, which refers to trees with holes hacked through them as “culturally modified,” made it sound as if the trail would stop short. You could see the walk-thru tree, but not actually walk through it. How cruel that would be! 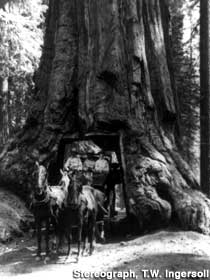 We called Yosemite, and spoke with Sue Beatty, a restoration ecologist. She assured us that the Park did not want to end foot access to the tree, and that the overlook was designed for people who simply couldn’t walk. In fact, she said, the problem isn’t people walking through the Tunnel Tree at all — it’s people walking (and driving) everywhere else, especially over the roots of the giant sequoias, which are surprisingly shallow and delicate. It’s to restrict them that the new plan for the Mariposa Grove is being created.

If we could only route everyone through our giant trees rather than around them, maybe they’d be a lot healthier (Okay, we’re guessing at that). The plan is still in development — actual work is scheduled to start in Summer 2014 — and Yosemite is encouraging people to offer their suggestions. If you want the full big tree drive-thru experience, that’s still available elsewhere in California.

And, in case you’re concerned, Sue said that the California Tunnel Tree appears to be doing just fine.

Sections: Attraction News Comments Off on Preserving Our American Right To Walk Through A Tree