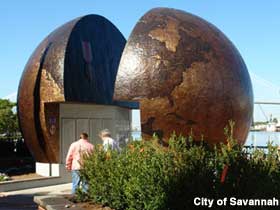 Wars, without exception, are awful —  but World War II honestly earned its world-class misery ranking as it tore its way through populations around the globe. Its death toll for military and civilians makes most post-World War II conflicts seem like inconvenient skirmishes (except, of course, to anyone in those conflicts).

The designers of the Chatham County World War II Monument in Savannah, GA want you to remember WWII was no ordinary dust up. Officially titled “A World Apart,” it’s a 20-foot-high globe split down the middle to symbolize a world divided by war into Pacific and European Theaters. 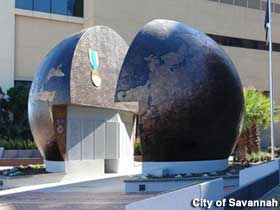 The steel globe is overlaid with bronze oceans and copper continents. The pathway through its interior does not lead past a geologic cross-section, but between walls hung with lists of the 527 Chatham County residents killed during the war.

Texting your friends or sending photos from “the center of the earth,”  though tempting, should be done discreetly if at all. Since you’ll be in Georgia anyway, we suggest book-ending your visit with a drive to pose at Savannah’s fortunately-not-cracked World Globe Storage Tank.

W. River St., Savannah, GA
Directions:
At the Chatham County World War II Monument. Along the riverfront, on W. River St., at the Whitaker St. ramp, in front of the Bohemian Hotel.

One Response to “War-Cracked Earth, Ready for Visitors”