« Monumental Grumbles | Main | The Inevitable Return Of Nothing »

Fans of phony biblical giants and sideshow hooey will be pleased to know that an exhaustively researched book about the Cardiff Giant has now been published. In A Colossal Hoax: The Giant From Cardiff That Fooled America, author Scott Tribble not only relates the “tall” tale of this manufactured mega-man, but also puts the craze in its proper Civil War era context.

The 10-foot-tall, supposedly fossilized figure was unearthed on a farm in Cardiff, NY in 1869. George Hull, atheist hoaxer, came up with the scheme in order to show up Biblical literalists who, not surprisingly, defended the authenticity of his carved stone fake.

As an added incentive for concealing the plot, charging admission to see the giant turned out to be extremely lucrative; when P.T. Barnum was thwarted in his attempt to buy the giant, he just went out and had one made for himself. But wait! There were more than two of them…many more…

For years, RoadsideAmerica.com has tracked the locations of the remaining Cardiff Giants. Experts agree that the original is in the collection of the Farmer’s Museum in Cooperstown, NY. But try to locate all the additional Cardiffs and the trail becomes muddier than a farmer’s field. Marvin Yagoda of Marvin’s Marvelous Mechanical Museum in Farmington Hill, Michigan claims to own the “original fake” commissioned by Barnum. Roadside has identified other giants at Circus World in Baraboo, Wisconsin, and in Frontier Village in Fort Dodge, Iowa.

Tribble’s book explains that sculptor Carl Franz Otto was commissioned by a group of businessman to create a replica — this is one of the giants that Barnum later purchased. Since Otto used clay and then cast a mold, he was able to make multiple copies. The exact number produced is unknown, but Tribble attributes at least four to the inventive artist; more were manufactured by other sideshow copycats. 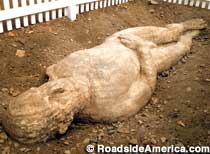 Joe Nickell, in his review of A Colossal Hoax in the May/June 2009 issue of The Skeptical Inquirer, reports that he saw a concrete replica in Canada, and viewed another giant (or possibly the same one) at the Erie County Fair in upstate New York.

How many “fake fake” Cardiffs are out there? We may never know.

But I can confirm the source of Marvin Yagoda’s giant, which he says he bought at a Sotheby’s auction in 1994. I attended that auction (yes, I am almost as ancient as the giant itself!) and still have the catalog. The Giant was Lot 10 of “The Smith Collection of Penny Arcade Machines and Related Memorabilia.” The description notes the paper maché composition and the photo reveals the figure’s sad lack of genitals.

Sections: Attraction News, Books Comments Off on We Might Be (Cardiff) Giants