This Is What Happens When You Close Your Company Museum 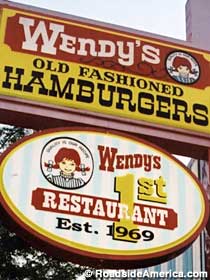 It was announced today that billionaire Nelson Peltz’s company Triarc Companies, also the owner of Arby’s, was buying Wendy’s for $2.3 billion.

The family of Wendy’s founder, Dave Thomas, was devastated by the news, according to the AP. Daughter Pam (the chain was named after Thomas’ other daughter) said that if Thomas were alive to hear the news, “he would not be amused.”

Too bad, Thomas family. You lost the moral high ground last year when Wendy’s International Inc. shuttered the Wendy’s Museum in Columbus, Ohio. This museum was located at the site of the world’s first Wendy’s, in downtown Columbus, which was a working restaurant as well.

According to the Wendy’s Corporation, the museum had been operating at a loss, and had to be closed because it was too costly to renovate. Rational, very rational. Except now you’ve lost the whole bloody company.

Sections: Tourism News Comments Off on This Is What Happens When You Close Your Company Museum