When Muffler Men Sailed the Seas 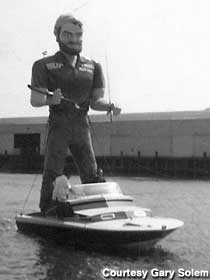 We originally planned to use our complimentary Time Machine tickets to travel back and warn Pearl Harbor or New Orleans. But now those temporal passes may have to be expended to get to April 26, 1964, to witness the Opening Day Yacht Parade in San Francisco Bay…

…and see a Muffler Man riding in a motor boat.

Gary Solem wrote to us: “The attached clippings and photos of Healdsburg’s big guy were recently discovered while relocating my father-in-law, Dickie Reese. I’ve heard about this caper for over forty years and finally there’s proof!”

Some of the news reports erroneously identified the Muffler Man as an “inflated rubber giant.” And newspaper accounts waffled between calling him a “Paul Bunyan” or a “pirate.” 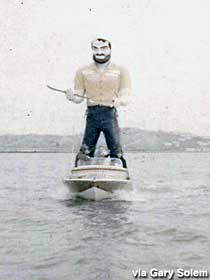 According to the San Francisco Examiner: “…the spectators — and they numbered in the thousands — emitted the greatest ohs and ahs for the boats made up as ‘Cleopatra’s Barge,’ ‘King Neptune’s Court,’ and ‘Tahitian Village,’ and the unnamed small boat that carried a giant pirate (15 feet high), bearded and hulking.”

In other stories he is described as 24-feet tall. The sixties were a confusing and exciting time for fiberglass giants!

One Response to “When Muffler Men Sailed the Seas”