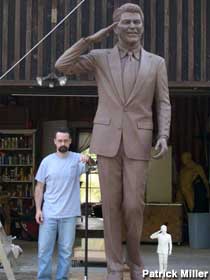 After four years and several setbacks, the world’s largest Ronald Reagan statue will be unveiled in Covington, Louisiana, this Friday. The statue was not Covington’s idea. “We had nothing to do with it,” said city council president Trey Blackall. A local oil tycoon, however, was interested in building a big Reagan tribute, and Covington volunteered itself as the site. “It’s a weird little story,” Trey conceded, “but when somebody offers something like this, you gladly accept it.”

The big bronze Gipper, created by local sculptor Patrick Miller, stands nearly 15 feet tall on its base, and will greet visitors to the city’s new Tammany Trace trailhead park. His head is not as large as the Reagan heads at the three Presidents Parks scattered across the country, but he is the largest full-bodied Reagan anywhere. And he may remain so for a while. It’s unlikely that a giant anatomical science center Reagan will ever be built, even though members of all political parties would enjoy a safari through his hair.

12 Responses to “World’s Largest Reagan Statue To Be Unveiled”