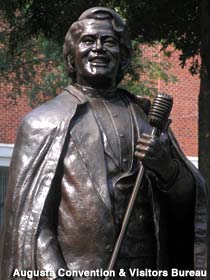 The Arts Council of Augusta, Georgia, has pointed a security camera at their city’s James Brown Statue. According to an article in the Augusta Metro Spirit, visitors to the statue are being encouraged to dial a special number on their cell phones, pose, and then the camera will take a photo and post it to the Arts Council web site for the world to see.

It’s another unusual add-on to the late singer’s statue, which was earlier considered for the installation of an all-James-Brown coin-operated jukebox (nothing seems to have come of that proposal).

One wonders what James Brown — who could be paranoid at times — would have thought of this. Is there some hidden purpose to assembling a full-face photo database of everyone who willingly poses with a James Brown statue? Or is it just to prove that the entertainer, even in death, is always on stage?

It appears you can also stand across the street and punch in the number if you see someone suspicious loitering around the base….

If this participatory technique proves successful, watch for it catching on with other statues and towns.