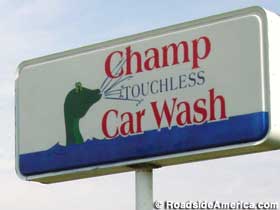 America's #1 water monster inhabits dark, deep Lake Champlain -- which is filled with fish, covers 435 square miles, and is a lot like Loch Ness in Scotland. In short, it's a great home for a prehistoric plesiosaur, which is what most Champ fans believe that it is.

The long-necked, small-headed, big-flippered beast has been seen by hundreds of witnesses over the past two centuries, and by Abenaki and Iroquois Indians before that. It's said to be about 30 feet long. The first good photo of Champ wasn't taken until 1977, and a video of it swimming under a boat was shot in 2005.

Vermont and New York have put Champ on their Endangered Species Lists, which makes Champ a rare Roadside Creature protected by law.

Prime location(s):
Lake Champlain on the border of northern New York and Vermont, and southern Quebec.

Special Powers:
If Champ is a plesiosaur, it would have to be 65 million years old, which is very impressive. Natural stealth abilities are key to evading detection along inhabited shorelines with boat traffic.

What's Out There for Vacation Travelers?
Port Henry, New York, offers a "Champ Sightings" billboard that is updated irregularly. Burlington, Vermont, features a couple of half-hearted businesses with Champy themes, along with a Champ monument that really should be larger. A fiberglass sea monster statue is the latest addition.