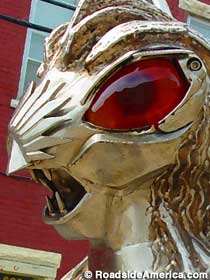 This gray terror wreaked havoc on the town of Point Pleasant, West Virginia, in 1966 and 1967. The Shawnee natives had run-ins with strange creatures in the area before, but Mothman was something special: six feet tall with a barrel chest, huge wings, and no head or neck; his glowing red eyes appeared to be set into his chest.

Mothman had a piercing, high-pitched squeal and was seen by more than 100 townspeople over a 13-month period, favoring an area near an old military munitions storage depot. The "flap" ended when a local bridge collapsed, killing dozens. 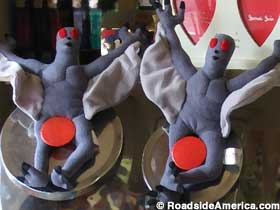 Mothman, like the Boggy Creek Monster, was an obscure local celebrity until a movie was made about his exploits. The people of Point Pleasant, to their credit, have seized on Mothman's celebrity, put aside their dread and horror, and now sell Mothman souvenirs, host a small Mothman Museum, and have erected an impressive Mothman statue in their downtown business district.

Other communities, similarly plagued by monsters, would do well to follow Point Pleasant's example.

Mothman's appearances have tapered off in recent years. Maybe all that he wanted was a little attention.

Special Powers:
He once kept pace with a car traveling 100 mph without even flapping his wings. He reportedly eats farm dogs.

What's Out There for Vacation Travelers?
Highlights of any tour of Point Pleasant are visits to the Mothman statue and the Mothman Museum and a drive by the old ammunition mounds.