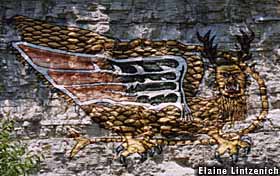 The Natives in what is now southern Illinois were terrified of a monster that they named Piasa (PIE-a-saw). It had a scowling human face with a long beard, but it also had antlers, big canine teeth, claws, multicolored scales, and a whiplike tail. And it ate people. It was not huge by monster standards, but it was evidently hungry and it was bound to get much bigger.

The first white explorers in these parts found two carvings of Piasa high on a cliff face overlooking the Mississippi River. These have been destroyed and reproduced and destroyed again several times. The current Piasa was painted in 1998 and covers an area half as large as a basketball court. It has wings, although the idea that the Piasa was a bird seems to have been a white man's invention.

We advise taking no chances: be prepared for either an aerial or a ground assault when you visit.

Killing without mercy and a bottomless stomach.

What's Out There for Vacation Travelers?
The anatomically unique Piasa is painted on a cliff face just north of Alton, reminding everyone to watch the skies.