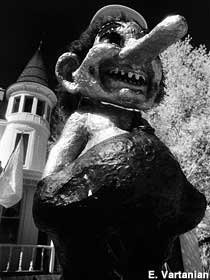 Experts will tell you that trolls attack and eat gnomes, although this not especially useful to humans on vacation.

Trolls on the American landscape take two very different forms: the squat, large-footed, helpful trolls that infest one town in the Upper Midwest, and a giant, car-crushing troll that sits under a bridge in the Pacific Northwest. 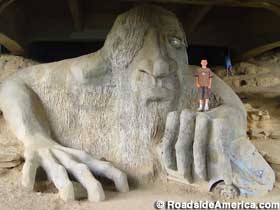 Trolls somehow got here from Scandinavia. They love shiny things and are often found in the vicinity of treasure. The troll under the bridge has been known to grab cars as they pass overhead, fascinated by the sunlight glittering off of chrome and mirrors.

American trolls look like statues, but they're in fact quantum locked, meaning that they're frozen in place whenever you look at them.

Special Powers:
Although trolls are exceptionally strong, they are no match for the big Billy Goat Gruff.

What's Out There for Vacation Travelers?
Mount Horeb has turned its Main Street into The Trollway, a popular hangout for trolls. America's only giant troll sits under the Aurora Bridge in Seattle.