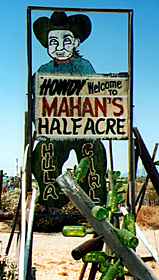 [Note: This Hypertour was written in 1994, and a number of the places are gone. You will find the most up-to-date info on attraction status by following the accompanying links to full reports elsewhere on RoadsideAmerica.com.]

Nicole Brown Simpson Townhouse. The trip begins with an impromptu sunrise stop at the Nicole Brown Simpson townhouse. When we passed the night before, a sign out front read "Go Home! There Is Nothing To See." Wishing only to take a picture and not to gawk, we find this morning that the sign has been spirited away as a souvenir, and crowd control fencing has been added to the front gate area.

Mahan's Half Acre (Hulaville) is an outdoor folk art environment of wine and beer bottle tree sculptures and desert sandblasted painted wooden signs. Mr. Mahan, who once guessed Max Baer's weight, lives in the middle of this splendor in a pickup truck camper without the pickup truck...

Miles Mahan died in 1997; what remains of his art and signage is now part of the collection of the California route 66 Museum.

[Full report on the Mahan's Half Acre]

A short hop from Mahan in the heart of Victorville is the Old West style cavalry fort housing the Roy Rogers and Dale Evans Museum. A giant statue of Trigger rears up out in front of the entrance, and its inside is packed with all of the artifacts of the duo's long and storied life. From Roy's Shriners' fezzes to his hunting trophies to his bowling balls, it seems to all be here.

Star attractions are the mounted skins of Trigger and Buttermilk, the couple's horses. THEY ARE MOUNTED, NOT STUFFED. There is a difference. It is the one thing that gets under the skin of the normally jovial Rogers. Dog Bullet is also mounted. Roy's silver dollar Bonneville (used when he was grand marshal of the Rose Parade) has six-shooters on the door handles, giant steer horns on the front grill, and a metal stud saddle over the transmission hump.

BONUS! We are in the back of the museum when an electricity zips through the others assembled, as an out-of-breath woman tremblingly says, "Roy Rogers is out front!" Roy makes it a habit of coming by in the morning a couple of times a week to pose with the tourists, and he's here today. One woman had been coming by every day for a week, camping out in the hopes of meeting the former Son of The Pioneers.

A pale Roy patiently poses with all of us, happily chatting away with his admirers. Roy does not sign autographs, but no one seems to mind. We ask if he will go out front to pose with the Trigger statue, but he explains, "I don't go outside."

[Full report on the Roy Rogers and Dale Evans Museum]

Out in the extreme nowhere between Victorville and Barstow, wrought iron gates with "Exotic World" spelled out over the driveway suddenly pop up. The former Marilyn Monroe of burlesque, Dixie Evans, greets us at this museum and more, dedicated to preserving the memories of her art form. Alabaster statues of Grecian goddesses and lawn jockeys decorate the front yard. In the heat, a horse lies in his paddock, motionless.

Inside the walls are filled with 8 x 10s of busty strippers from days gone by. Lily St. Cyr, Tempest Storm, The Eye-Ful Tower, and Dixie herself are among the hundreds of dancers represented. Historic G-strings are framed, as are Sally Rand's shoes. Displayed is a nude velvet painting of Farrah Fawcett, and the ashes of The Bazoom Girl, Jennie Lee (who was the founder of Exotic World). So is the sleigh from Dr. Zhivago, for what it's worth.

Dixie leads the tour, doing a bit of her old Monroe routine, as Barbara, in a French Maid costume, serves us ice water. People from all over the country send in their striptease mementos and Dixie is constantly trying to get them all displayed. Many of the dancers are exotic dancers, not strippers. There is a difference. Exotic dancers are not required to disrobe.

In the carport, a Rolls sits idle, and the adjacent land has been cleared by former singing cowboy Charlie Arroyo, who wants to build a $50 million multimedia burlesque theater. "Bankers," he snorts.

Our plan at this point is to take the ladies to the World's Largest Thermometer in Baker, to perform a hot dance to crack the 134 degree record set in nearby Death Valley. Dixie had arranged for a "local girl" to round out the entourage. She arrives in a white stretch limo that Dixie has sent out. Everything looks good -- so we head out to the Exotic World entry gate for a few more pictures. Suddenly, the limo is speeding away. The local girl's boyfriend doesn't want her going anywhere, and -- by phone -- has ordered her home! The thermometer dance is canceled, and we bid adieu.

Since this report, Exotic World moved to Las Vegas, NV and is not currently open to the public.

[Full report on the Exotic World]

Dead desert Stuckey hulks have been turned into radio stations, and in one case west of Baker, a combination radio station/towing service. The Christian radio station we are listening to asks the question: "Have you thanked the Lord for dust?" And a Christian Motorcycle Association's billboard looms over an outdoor used furniture outlet.

By the time we get to Baker, we understand why Roy Rogers doesn't go outside. It is 121 degrees outside the Bun Boy restaurant. At least that's the reading from the World's tallest thermometer -- 135 feet tall -- nearby. Feel your eyelids sucked dry of moisture! Get inside and order a burger!

By the Monorail entrance is a special room with Bonnie and Clyde's Authentic Death Car, bullet riddled, and across from it is a newer addition, Dutch Schultz's Gangster Car, also bearing .38 caliber pockmarks. Mannequins add a touch of realism, though both vehicles are protected by Plexiglas fences.

We arrive at the Liberace Museum just before closing, to the exasperation of the manager. In we pop, for a quick peek at a representation of Liberace's Palm Springs bedroom, a collection of his most outlandish outfits, including the famous bicentennial hot pants suit, and the world's largest rhinestone.

[Full report on the Liberace Museum]

The best corner in Vegas today is the corner of Vegas Boulevard (The Strip) and Tropicana. Huge Easter Island heads pop up in front of The Tropicana, and behind them is The God of Money, a talking Tiki, who wishes the faithful good luck. Across from Tropicana is the huge lion entrance to the MGM Grand. Of all the splendid goings-on there, our favorite is the animatronic Foster Brooks.

Cordoned off with brass railing in one of the lounges, the animatronic Foster Brooks does the real Foster Brooks' act, that of a badly drunk bad nightclub comic. Even the animatronic arms seem to move with a slight palsy. It is as if Vegas is saying, "Look, we are a family attraction. We keep the drunk as a museum piece behind a brass railing, so he won't bother you or your children."

Inside the spectacular Luxor pyramid, multimedia rides teach you about the difficult choices of mankind's future.

A tape of soothing music for relaxation causes us to miss an exit, and we hurtle blindly for thirty miles before veering back on track.

When we finally do get back on track, it isn't much help. We're heading out into the middle of the Nevada desert, anxious to join the weekly (every Wednesday night) UFO watch on NV 375 south of Rachel. But we can't find any UFO watchers. We can't find anyone or anything, except for the occasional jackrabbit we accidentally run over. We decide to continue north, into town, to the Little A 'Le' Inn, for company.