Twisty single-lane mountain roads make for sluggish driving. We're trapped behind wide grass cutters and rafting trip school buses, until Providence smiles, and we find an ambulance going our way. Drifting in behind it, we make up for lost time as the cars ahead part.

Colorado US 50 cuts through Canon City, like an ax-murderer's blade through a hapless victim's throat. On the west side of town, just north of the new prison on 1st Street, stands the old women's prison and accompanying Prison Museum, an attraction worthy of grisly metaphors. An actual gas chamber sits on the lawn in front of museum; nearby are two vintage cells, apparently used to store gardening tools.

Inside the museum, take advantage of the gag photo opportunity: striped prison overalls and hats you can wear while standing behind a set of fake bars. Pretend you're one of the prisoners who used to be routinely flogged and tortured here and whose misery is glowingly chronicled for your entertainment.

Every cell is outfitted with exhibits devoted to an aspect of prison life (substance abuse, rioting, and isolation, among others) or to famous prisoners -- such as Alferd Packer, America's favorite cannibal. One contains a feebly animated "Sheriff Sam" robot, creaking and clunking while it relates the career of warden Roy Best, who wound up in prison himself for "mass flogging" of prisoners.

More on Museum of Colorado Prisons 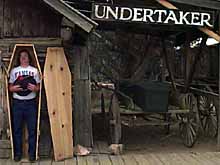 The billboard at the entrance to this well-mounted Wild West attraction depicts Abe Lincoln yanking a gallows handle -- a bad guy plummets earthward, his neck in a noose. "Live Hangings!" it proclaims.

Buckskin Joe's stands eight miles west of town on the road leading to Royal Gorge bridge. It's a place to bring the kids and others who are bored by natural beauty. BJ's hangings are part of a Wild West show, acted out by semipro gunslingers and seasonally underemployed ski instructors. The crowd is nervous with anticipation. A jackrabbit darts from beneath the gallows and hightails it to the hills. Vacationing retirees stake out good seats from the porch of the Undertaker's storefront. More energetic tourists cram into two upright coffins for photo opportunities. 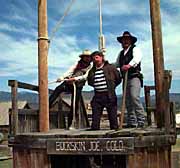 Guns blaze. A good guy is shot in the leg and then killed as he begs for mercy. The perpetrating bad guy is tracked down by the sheriff, also shot in the leg, and then DRAGGED SCREAMING TO THE GALLOWS AND HANGED. All of this takes about three minutes. After the applause fades, the dead bad man ends up spending more time dangling at the end of his noose -- while families pose in front for once-in-a-lifetime snapshots -- than he spent living.

Directions:
The attraction was sold, crated, and shipped to an undisclosed location in September 2010.
Status:
Gone

Roadside regulars will remember that Jim Bishop, man of vision and lifter of rocks, had been battling the federal government ever since he began building his dream castle on a mountainside overlooking CO 165 south of Canon City twenty-five years ago. Things have changed since we last visited -- but have they changed for the better?

Now the government loves Jim Bishop. He's been allowed to "adopt" a three-mile stretch of the highway that leads to his castle. The shoulder is jammed with the cars of visitors, the very people whose letters of support to the IRS -- Bishop claims -- turned things around.

And the castle is still growing, no doubt about it. Bulbous gold minaret caps sit next to the gift shop, ready for installation. The twin towers that soar above the main hall are more lofty than ever, making the climb to the top ever more exhausting. Wife Phoebe sez Jim can hardly bring himself down for a meal. And yet we wonder -- now that Jim Bishop has made his peace with Uncle Sam, will his endless anger-fueled energy subside?

Jim, thankfully, has no time today for idle speculation. He's learned to talk to people and still make progress. He gets back to work, the air compressor humming as he climbs a ladder atop one of the tall spires to do some spot welding.

That's our name for this memorial to the dead from a clash that hardly anyone heard a straight story about at the time. On April 20, 1914, John Rockefeller ordered the Colorado militia (through his pal, the Colorado governor) to fire on a camp of striking mine workers and their families. There's a granite monument with figures of a man, woman and child. Next to it is the restored Death Pit where two women and ten children suffocated after the tent above them was caught fire. 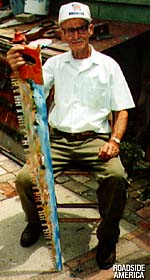 On the north side of US 160 at the east end of town you'll find the property of Mario Benedetti, age 84. It's easy to spot. Paintings of horses and Indians hang on the fence that encircles it. Beyond, weird poles painted in endless combinations of red, blue, and yellow, and surrounded by rusting auto parts and other scary- looking slabs of metal, beckon.

Mario has been painting for 70 years, he explains as he opens building after building packed with framed oils of more horses and Indians -- hundreds of them. "I sell anything I can," he insists, though he obviously hasn't recently.

Mario refuses to exhibit his works at shows. "They bang the frames," he complains (and he has a right to -- he carves them). Thus, the only people who can buy Mario's work are the people who come out to nowhere Trinidad, Colorado. He has fans in New Mexico ("People from Santa Fe -- Tin, if it's painted, they'll buy it.") but apparently not enough. Trinidad's government is forcing him to clean up his yard and, he insists -- "a lot of my stuff has been carted away." That's hard to picture, since there's so much stuff still here, but you'd probably do best to get out here quick.

[1999 Update: Mario and his folk art are reportedly gone, or at least very hard to find...]

At the local Loaf And Jug quick-mart, we buy several novelty packages of "Love Gum, a full-potency gum to increase romantic power." The quick-mart, we note, is only a mile or so from St. Vincent's of Trinidad, the nation's number one sex-change hospital.

In 1943, Boise City was mistakenly bombed on a night training mission from an air base in Texas. The town made a replica crater, right on the town square.

Before you get too excited about this oddity, let us mention that the "crater" is only about two feet across, and less than a foot deep. In other words, think twice before coming here with gag traveling-partners-spread-eagle-dead-in-the-crater photo ideas, like we did. More info

The town also has a thirty foot long steel dinosaur statue at the city limits to the north, in honor of the nearby dinosaur quarry.

6 N.E. Square, Boise City, OK
Directions:
Jct of US 287 and US 412. On the traffic circle, in front of the Chamber of Commerce caboose.
Hours:
2019: Temporarily in storage.
RA Rates:
Worth a Detour

Worth a drive-thru just for the signs, which confirm that some percentage of the town gets the joke. Well done Hooker! Our only suggestion: add the word "Kwikee" to the sign in front of the "Klean Kar Wash." More info