A 15-foot-tall fiberglass beaver statue sits on a trailer in a small park between two storefronts on the main drag of the small town of Beaver, Oklahoma. With both paws he clutches a gray lumpy wheel of dried cow dung -- a cow chip! And why not? The town of Beaver should be proud of its undisputed title: Cow Chip Throwing Capital of the World.

It is here that the National Cow Chip Toss Championships are held each April. King Cow Chip, a leering cartoon of a dried bovine fecal wad wearing a tilted crown, is the town's registered trademark. This "Dried-in-the-Sun King" has brought notoriety -- and prosperity -- to Beaver. As with any long, unchallenged reign, the populace has become inured to their own charm. King Cow Chip's royal entourage keeps the claim alive by cranking out commemorative gift boxes of cow chips, entertaining foreign dignitaries, and dragging the beaver trailer around town for parades.

Randy Campbell, the mayor of Beaver, is obligated to greet us with open arms, not to mention some gift-boxed cow chips. He assures us he has only tossed a chip once before, yet his mean curve pitch at our Sony Handicam betrays a suspiciously-practiced skill. He tosses the chip underhand -- a Frisbee flick -- and sends it bouncing off the bumper of a car on the opposite side of the wide, paved main street. "I think that's my mother-in-law's car," he notes.

Douglas Ave., Beaver, OK
Directions:
Statue is on wheels, and moves to various locations up and down Douglas Ave./US 270. We last saw it parked near Pizza Hut at corner of US 270 and Fifth St.
Phone:
580-625-4726
Admission:
Free.
RA Rates:
Worth a Detour

More on Cow Chip Throwing Capital of the World

Signs on the way out of town read "Beaver City Stockyards. Where a handshake is still a contract," and "Watch Your Curves - Eat More Beef."

Of the dozen or so concrete creatures that congregate on Gene Cockrell's front lawn, the most incongruous is his Dallas Cowboy Cheerleader. "Originally I made her as a Texas cowgirl, without clothes -- just boots, a hat, and a rope -- and she was mighty fine lookin'," Gene confides in his Panhandle drawl. "But my wife and a neighbor lady made me dress her up."

Now decked out in denim hot pants and halter top, the Cheerleader stands next to two half-naked Indians straddling horses. Off to the right, a fully-clothed Jesus communes with a lion and a lamb. The rest of the population are dinosaurs, even a fanciful two-headed hydra. A squat, grinning Barney spreads his purple arms in welcome, unaware he is being tailed by an angry T Rex.

Gene offers to guide us out to his BIG ONE -- Audry, his 50-foot-long brontosaurus (named after his wife of 42 years) -- about three miles south of town on Highway 83. The dinosaur sits on a high stark mesa and can be seen overlooking the highway. The road to the top is gated, but Gene takes us up for a few photos. "Watch out for the rattlesnakes," he instructs. The view is impressive but we mostly eye the weedy ground.

Gene would like to put up a 50-foot-tall Statue of Liberty on a bluff overlooking Canadian, but the town has neither the funds nor, frankly, the proper civic vision to allow it. He was asked by the nearby pseudo-Irish town of Shamrock, TX, to create a 40-foot-tall Leprechaun, which would hang off the side of their water tower. When Shamrock heard that Gene's costs and wages would total $10,000, they decided to stick with their spittle-caked Blarney Stone for the time being.

Will Gene get the opportunity to realize his vision? "Come back in about five years," he says. "If I'm not dead I'll have some more."

We're back on the road, heading south. Christian radio station KJIL tells listeners of its children's programming that backsliders are like an earache, keeping the whole body up at night. But it feels so good to the whole body when that earache goes away. Then they play a rap song telling the story of "Shadrach, Meshach and Abednego...Yo!...In case you forgot/It's really hot!"

Marshall Drive, Canadian, TX
Directions:
Gene lives east of town. Take US 60/83 to the south side of town, and turn east onto Cheyenne Ave. (which eventually turns into Marshall Drive). Drive east, through the four-way stop at Main St., and continue east for another 1.5 miles. Look for the house on he left with the statues on the lawn.
Hours:
Private residence, but can be photographed from the road
Admission:
Free.
RA Rates:
Worth a Detour

An hour after leaving Canadian, we swing east on Interstate 40 at Shamrock. The barren water tower is easily visible. We do not stop.

Now Phyllis Schlafly is on the air. Her radio program discusses the Lake County, FL, school board resolution, which says that while their schools will be required by law to distribute materials about multiple cultures, they will teach the superiority of the American Culture. "It's not that we are superior human beings. It is just our culture is a cut above." Guest, host and callers agree. The opposition is using the tactics of argument by epithet. "How would those who call us right-wing Christians like being called left-wing Jews?" The show is sponsored by the Top of Texas Crisis Pregnancy Centers.

When Elvis Presley and his entourage drove from Memphis to Vegas, the best midway point, in his opinion, was The Trade Winds Motel in Clinton, OK. He stayed in Room 215 on four separate occasions. The Trade Winds has preserved it in its pristine 1960s state (and you can reserve it for an overnight stay). More info

Three doors down is the Del Rancho hamburger restaurant, featuring an unnamed hydrocephalic cartoon Li'l Buckaroo as its mascot. Patrons get to pass around red tableside phones to call in their orders.

Across Western Oklahoma we fly, passing the hometowns of Roger Miller (Erick), Astronaut Thomas Stafford (Weatherford), and Garth Brooks (Yukon). Highway signs advise us that hitchhikers may be escaped prisoners. Among the billboard barrage starting at the outskirts of Oklahoma City is "Jesus Sets Captives Free - Joe's Bail Bonds," and an invitation to join "The Sons of Confederate Veterans." The Oklahoma Horseshoeing School is visible from the highway. We pass a semi hauling a huge load of "human blood plasma."

Located on the campus of Oklahoma Christian University of Science and Arts, Enterprise Square opened in 1982. The guide apologizes for the smell of Lysol in the elevator. A large group of mental patients from Tulsa's "clinical service" had been through earlier in the day. "They smell bad." If a trip through the mad world of Enterprise Square doesn't send them over the edge, nothing will.

The extravagant show begins. Space aliens crash land, interrupting a video introduction by Bob Hope. They will follow along with us, learning the wonders of America's free-enterprise system and the horrors of government control. 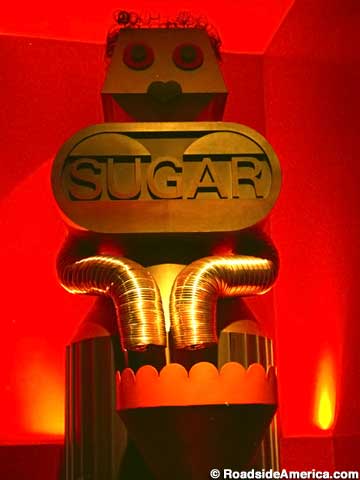 When you reach the top, you get to navigate your way back down through the Hall of Statistics, the Hall of Giants, and a fake Donut Store overseen by Doc, the talking robot. The Great American Marketplace features one of the world's largest cash registers and giant paper money with 3-D President heads singing the praises of the marketplace in barbershop quartet harmonies. A bicycle-pedaling skeleton wearing a helmet emblazoned with the name "Cal C. Umm" explains osteoporosis in the new dairy display. Eventually you stagger into the gift shop, number if not wiser. We recommend the "I Love Capitalism" bumper sticker.

Freedom Sings - video clip of the Singing Wall of Money.

We're running an hour late and our penalty is meted out here. The Prayer Tower is golden and glowing in the early evening sun. It is also deserted and locked up tight as a drum. If we had arrived on time, we would have been treated to the multimedia extravaganza Journey of Faith, the walk-through life story of Oral himself. We've seen it before and recommend it to those of you with a better sense of time.

The Healing Hands, a pair of 40-foot-tall bronze hands bursting upward from the ground in prayer, has been moved from its former location in front of Oral's faltering City of Faith Medical Center to the entrance drive of his university. And they look great as long as there's daylight.

To make up for time, we skip the World's Largest McDonald's in Vinita, OK. (We drove under it. It stretches over I-44.) We screech into Commerce at sundown to check if the Mickey Mantle museum is finished. The policeman we asked shook his head no. There is nothing. No statue. No plaque. No sign at the city limits. Just an unobtrusive Mickey Mantle Blvd. The town's true feelings toward the dead alcoholic Hall of Famer may be intuited from the big signs near the high school sports fields, reading: "True Freedom Is Drug Freedom."

Night falls, but tent-top fireworks stores are bustling in every strip-mall parking lot, every vacant gas station lot, every Optimist Park. Rows of roman candles and exotic cones are visible from the road. Black Cat posters flap in the warm July breeze. We need sleep.