We bid adieu to the hometown of Red Skelton and make our way east as America celebrates another birthday. Several radio stations report the same survey result: Two-thirds of all Americans say that they are patriotic or very patriotic. But ... (every newscaster pauses knowingly) ...three-fourths think that Americans are less patriotic now than in older days. The two things are far from mutually exclusive, and the results are exactly what you'd guess. But on this holiday, the courts are not open in Los Angeles, and news is harder to come by.

"Troublesome taverns and liquor stores" must now notify local churches and school boards when their liquor licenses are up for renewal -- a new Indiana law is explained on the radio. "Every third baby dies by CHOICE" cries a billboard outside of Vincennes.

Limestone is king in this part of Indiana. The local gravestones are works of art. Nearby Bedford once tried to build a full-sized-replica pyramid out of the stuff. (Senator Proxmire blew the whistle on the federal grants Bedford was getting to do it and the project collapsed.) All this explains why the Joe Palooka statue standing outside the Oolitic City Hall is made of limestone. What it does not explain is what is it doing here in the first place. Palooka was a Sunday comic strip character -- an honest boxer -- and this statue was commissioned in 1947, when the champ's popularity was at its highest. But why here? Why Oolitic?

Main St., Oolitic, IN
Directions:
Hwy 37 to Oolitic exit. Take Main St. through blinking traffic light into downtown. Statue is on the left, between the post office and town hall.
RA Rates:
Worth a Detour

Nashville is a lovely bed and breakfast town. It is also home to the country's best museum honoring the bloody saga of crime hero John Dillinger. It's a museum packed full of fun and jammed solid with hundreds of unique displays, each with single-spaced, typewritten explanation sheets. If you plan to read everything here, you'd better extend your vacation.

JD's trousers of death are here, as are other great Dillinger esoterica:...the bloody wax display of him on the morgue table (a sign warns "Please control your children."), The casket used to transport his body to the grave site, his first tombstone, and more, more, more. Above eye level is propped a "Visible Head" model with a Lucite spear running through it to depict the head shot that killed Public Enemy #1.

This museum recently moved to a new location and in the process has lost some of its gory charm -- such as the "Danger" room which warned women and children with faint hearts to stay out. Owner Joe Pinkston shrugs when he discusses the change. "Wheelchair accessibility" is all he will say.

Mr. Pinkston explains to anyone who will listen that Dillinger was a hero because he was a good guy ("Not like O.J." he snorts), and that he was actually paid by the owners of the banks he robbed so that they could collect insurance and default on their accounts. When his usefulness was at an end, the FBI was allowed to kill him. Conspiracy and blood: hell, this is still a pretty good place.

As we make our initial pass into this depressing town, we see a commercial archery range set up in an abandoned lot. It is littered with trash, target deer, and bear mannequins. Hamilton has seen better days.

Realizing this about itself, Hamilton once officially added a "!" after its name (Hamilton became Hamilton!). But apparently that wasn't enough to turn the town around and the "!" was dropped. Now all Hamilton can boast about is its monument to Captain John Symmes, "originator of the theory of concentric spheres and the polar voids."

In plain English, Captain Symmes thought that the earth was hollow. Devotees of the Symmes theory believe that our planet is empty inside and the interior can be reached through two big holes, one at each of the poles.

The Symmes memorial stands in a small, ratty park. When we visited, a crazy man was vigorously shadow boxing on the park sidewalk, and a group of locals was playing basketball on a court next to Hamilton's claim to fame -- oblivious to its presence.

The monument was built in the 1840s by Symmes' son. A "hollow earth" is rendered in granite atop Hamilton's monument -- it looks like a featureless Nerf ball with a tunnel torn through its middle. Supporting it is a battered pillar so abused over the years that its original inscriptions are nearly illegible.

Hamilton restored the pillar as a bicentennial project (in its "!" glory years) by filling in the largest blown-away chunks with patching cement and bolting new, readable plaques beneath the old, illegible inscriptions. "A native of New Jersey," says the one with the largest letters. Perhaps Hamilton isn't TOO anxious to have itself associated with the crackpot captain.

The pillar and ball now stand within a steel cage, protected from residents who haven't forgotten how Hamilton spent their bicentennial tax dollars.

Sycamore St., Hamilton, OH
Directions:
OH 177/Main St./High St. to 2nd St., go left (or whatever, it's one-way), three blocks to railroad tracks. That's Sycamore. Sycamore is the north boundary of the park, which is between 3rd and 4th. The monument is near the center of the park.
Admission:
Free
RA Rates:
Worth a Detour

Near Hamilton, just off the interstate in the town of Monroe, is Sara Jane's Country Kitchen. It is memorable for its AC/DC 4-way Panasonic booth TVs (25 cents for 10 minutes) -- removing the only excuse to eat at home. First, we watch the Home Shopping Club on our gray, interference-filled screen; if we had a tableside phone like those at Del Rancho (See Day 4), we could call in. Then we tune in a young Kevin Costner-like preacher who explains, "The Bible says, if a man is found lying with a woman who is not her husband, BOTH of them shall die!"

As we turn up the volume, he adds that when a man has sex with a virgin, he forms a "blood covenant" (get it?) and blood covenants, according to the Bible, cannot be broken. (This echoes the "Gateway to Joy" radio show we heard earlier in the day -- denouncing womankind's "gift of gab" and promoting "practical ways of honoring our husbands.") Other diners strain to watch when it starts getting good.

Baseball caps for sale next to a rack of "Friendliness Candy" attack Chevrolet -- one gets the sense that Monroe is a Ford company town -- and trumpet convictions such as "American by birth -- biker by choice!" A good place to eat and leave. 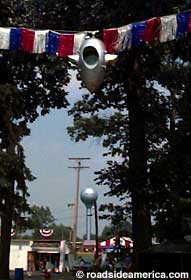 Normally the world's oldest traffic light is housed in the town museum, but every July 4 it is brought outside and hung over the entrance to the town's Independence Day spectacular in Community Park at the corner of Harrison and Walnut. It looks like an aluminum football with wings, a la Buckminster Fuller, and it uses an eye-numbing hypnoswirl process to change colors from red to green. We applaud Ashville's sense of obligation to the relic that put it on the map, even though -- in general -- we hate traffic lights.

This monument commemorates the 14 US Navy airshipmen who met their death in 1925 on the USS Shenandoah, America's first big dirigible. It was also America's first big dirigible to crash and kill people. Actually, all but one of America's dirigibles crashed, which is why now we only have blimps. And actually, the true crash site is back in the wooded hills east of town, but the memorial was thoughtfully moved to the roadside where more people could admire it. A small metal replica of the Shenandoah floats above the tall granite slab surrounded by the clouds of the storm that eventually ripped it apart.

The sun is a hazy red ball squatting on the mountain tops as we navigate the crumbling four-mile road that leads from Route 285 near Wheeling to the Palace of Gold [from I-70 at Wheeling, WV, take WV Route 2 south to Moundsville, take 250 East, a winding mountain road, until you see the signs] . Billed as "America's Taj Mahal" in its literature, it is a tourist attraction on a grand scale. We can only hope they maintain their momentum and one day finish their City of God.

It is a beautiful, secluded place in the rolling hills of West Virginia. The first large complex we come to is The Palace of Gold itself, a golden shrine with turrets and minarets giving it the feel of a great ship. Gardens line the footpaths and from the balcony of the palace, one can see the grounds of the City of God.

A big festival has just taken place and workers and tourists alike are exhausted from a long weekend of frenzied celebration. They stare at us blankly; their conversation is disconnected, ethereal. Maybe we've just kept them up past their bedtime. The Deities have been put to bed by the time we arrive.

As peacocks hoot in the deep shadows of evening we finish our day in guest cabin 5, listening to the far-off sounds of fireworks; an incongruous and perfect place to celebrate the 4th of July.

More on Prabhupada's Palace of Gold