The next day begins with a sunrise visit to the intersection of 287 and I-90 in Three Forks, and that obscure object of our desire, The Oxen Statue That Pees. Yahoo! We made it! In the distance, a cement factory bellows white steam like a geyser. But our attention is focused on "New Faithful," at home in front of The Prairie Schooner Restaurant. New Faithful is one of the two twelve foot-long oxen statues that appear to be pulling the restaurant. When the cashier inside sees us admiring them, she turns a secret handle - and "New Faithful" pees! Regulars leave their guests outside, rush in, and excitedly demand, "Turn him on!"

[August 2001: Several reports verify that the Prairie Schooner Restaurant has been bulldozed and the oxen are gone!]

After seeing New Faithful, we are beside ourselves, and during our next long patch of road the giddiness overtakes us. With "Magnu" pounding, we try to roll down our windows just enough so that the air rushing in vibrates our minivan and creates an infrasound wave which will cause other motorists to lose control of their vehicles.

Infrasound, powerful vibrations of less than 20 cycles per second, was first investigated by French riot police in the 1960s. Our experiment succeeds in spilling Mike's breakfast over Doug's camera bag.

"Club Foot" George's Club Foot is the Thompson-Hickman Museum's most popular exhibit. It was exhumed from the town's Boot Hill to prove that George Lane was one of the four outlaws lynched in 1863 by an overzealous citizen's coalition. Gnarly, swaddled in burlap, and sealed relic-like in a snowglobesque glass cylinder, it's one of the few displayed American body parts that gets its own postcard.

We race south on 87 into Idaho, avoiding Yellowstone and the Tetons. 'Bagos and sleepy weekend sportsmen clog the roads in these afflicted areas. The way they drive, you'd think there's some kind of law against drinking coffee in this part of the world.

Rexburg, ID is the site of the Teton Flood Museum. The museum is housed in a former Latter Day Saint church, salvaged after a nine foot wall of water from the Teton Dam's 1976 rupture turned Rexburg into Mudville. The museum is a disappointment - housing only a few mud-caked mementos, photoboards, and a dam model along with dull antediluvian Rexburgabilia. You can buy bottles of "Flood Mud" and "Dam Dirt" at the gift counter, though. 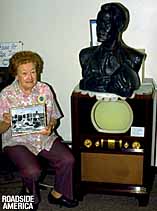 Nearby Rigby was the boyhood home of TV's Dad, Philo Farnsworth, and signs at the city limits proclaim it " The Birthplace of Television." The town museum is located in an old bank building, and the vault enshrines its most precious artifacts - a collection of old TV tubes, a bronze bust of Farnsworth, and some of his personal items and awards.

Volunteer Alice Lufkin, 86, went to high school with Farnsworth. She sits in the vault and tries to provide tourists with a living link to the past. But her secondhand accounts lead us to believe that as an adolescent Lufkin never gave the nerdy Farnsworth the time of day. We do learn that Farnsworth was inspired plowing a potato field, the parallel rows triggering his notion of television scan lines.

[Update: The Rigby Museum has moved out of the bank vault and into an abandoned motel restored by convicts. Also on display are collections of ladies' hats and hide scrapers and, for some reason, a scale model of the Spanish galleon Antocha (sunk in 1622).]

More big potato ideas are explained in Blackfoot, where the Idaho Potato Museum homage to the mighty spud. See the world's largest Styrofoam potato, and the world's largest potato chip, a 25-inch Pringle donated by Proctor and Gamble. Ponder the burlap tuxedo worn by the first Potato Commissioner, or the heroic "Potato In Space." The Expo plans to add a simulated potato cellar with authentic smells!

Uncontaminated dust billows from the road as we screech into Atomic City. More than fifty reactors have been built nearby, but today only 25 people live in this flat, isolated ghost town to be. As we explore the streets in our radiation suits, two patrons come out of the combination bar/post office/gas station and do not kill us.

Instead, they recommend the tour of nearby Arco's Experimental Breeder Reactor 1. This was the World's First Nuclear Power Plant. Picnic tables are thoughtfully provided under a pair of house-sized experimental atomic jet engines.

On to Shoshone Ice Caves, just north of Shoshone. A hairy savage clings to a bright green dinosaur statue at the entrance. The cave's rare underground ice accumulation allows for figure skating photos in its brochure. But the hot air constantly let in by tourists makes the actual ice along the cave floor unskatably sloppy. The cave is pleasantly cold, though not very extensive, and there are no old people playing Chinese checkers at the end.

The sun plummets, and so do we -- south to Twin Falls and Evel Knievel's Snake River Jump Site. Evel's unsuccessful 1974 attempt to jump across the Snake River Canyon in a rocket powered motorcycle is noted by a small monument in the visitor's center parking lot. The still-extant jump ramp, a big earthen blob, is visible two miles up river.

The drive from Twin Falls to Boise is just as well made at night.