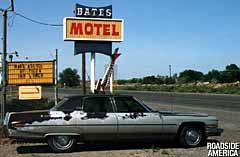 We look out at endless potato fields, trying to think up our own great inventions, as we careen into Eastern Oregon -- our database depressingly thin for the next 300 miles. A stop in Vale for a souvenir photo in front of the Bates Motel is a quick diversion.

Soda and dried meat snacks sustain us as we cross another bleak scabland, entering the Living Video Game of Route 26.

Every few seconds, for miles and miles, tiny brown rodents dart across the highway. We swerve, brake, accelerate, brake - we have no idea what'll they'll do next. Dozens scurry at the same trajectory, while others reverse course, or just raise up and stare at our tires. 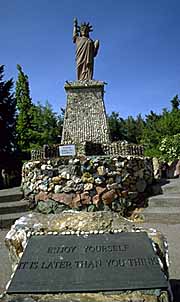 We are behind schedule and Hawkwind's "Silver Machine" is apparently driving the van when we reenter civilization in Prineville. A patrolman is about to let us off with a warning when he sees a life-sized plaster replica of Einstein's Brain atop our dashboard. Instead, he offers us a citation and this travel tip: If you must speed, keep it under eighty, to avoid Oregon's heavy fines, a state without a driving school rehab option.

Einstein's Brain, once mysteriously housed in Lawrence, KS, is one of our longtime Grails. Perhaps America's most interesting dead celebrity body part, remaining portions of the brain are protected in a private collection by the pathologist who performed the autopsy. We keep a replica on our dash to remind us of humility; that no matter what big peeing oxen statue we may have just seen, there is still something just ahead of us, something great, that eludes our grasp.

Suddenly we're at Petersen Rock Garden, in Redmond. Here, the late Mr. Petersen paid homage to America with his feverish folk constructions of stone and glass, including an Independence Hall and a phosphorescent tribute to democracy. The plaque below his Statue of Liberty (holding a light bulb torch) reads: "Enjoy Yourself - It Is Later Than You Think."

The jewel in Oregon's navel is Redmond's Fantastic Museum. Jim Schmit has assembled an eclectic mountain of cool stuff - including Seattle's old Doc Jones material. See Olaf, the nine foot giant, the altimeter from the Hindenburg, and Hitler's stamp collection! Jim is driven by collecting fever, scooping up everything from historic "four-holer" outhouses to Ike's 1953 inauguration parade Caddy.

[The Fantastic Museum moved to Sisters, OR, for a while, but was reported closed in 1999]

In Maryhill, Washington, on a plateau high above the Columbia River, stands Stonehenge. This full-sized replica is complete, the way the pagan Druids would have wanted their original to look. Road-builder Sam Hill finished Stonehenge in 1930, dedicated to the World War I dead of Klickitat County. It is a stark concrete vision, made more easily memorable by the gift shop that has been erected nearby. Sunset visitors can still drive doughnuts in front of the monolith - the way the Druids would have wanted it.