Another one-time outdoor colossus, the He-man, had been moved inside Giant's Gym due to stringent city signage laws. The top of his 16 foot bronzed body pokes out of sight through a hole in the gym's drop ceiling.

The Oregon Museum of Science and Industry (OMSI) was on our list for three reasons: a giant outdoor heart, an anatomically transparent woman, and a seventy foot tall talking tree. We discover, sadly, that the heart was broken by vandals, became a safety hazard, and had to be removed. The transparent woman is "out for repairs." 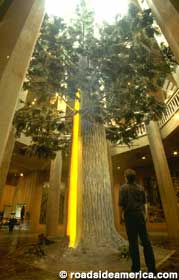 [ 2002: The OMSI has moved away from the World Forestry Center to a factory building on Portland's east side. The transparent woman is back from repairs and the walk-through heart were displayed for a while, but are once again hidden. The museum also features tours of the US Navy's last non-nuclear sub, the Blueback, which appeared in the film The Hunt for Red October . 1945 SE Water Avenue]

The Talking Tree is actually next door at the World Forestry Center. It's the closest thing to a goddess shrine area pagans have, but it's still pretty dull. Officials say that it's much better than the abstract "70s Tree" it replaced. [2005: The World Forestry Center has been further modernized -- no laughs to be found here. The tree is gone.]

Nike Town, in downtown Portland, is not a tribute to Cold War-era Nike missiles, or even the pagan goddess of victory. Ads for this full price active wear outlet ask the question, "What If The Louvre Had a Sports Wing?" To this we add, "What if the Louvre looked like it belonged in a mall, displayed only one or two things of interest, then sold you sweat socks?" Postcards are $1 each, and picture taking is verboten without the approval of a PR remora. 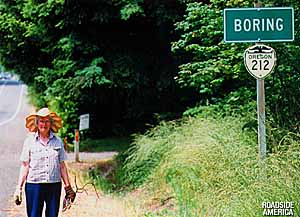 Next, we hope to fuel up in Milwaukee at Art Lacey's famous Bomber Gas, a filling station with a B-17 suspended over the service island. Only now it's a flower shop (with adjacent restaurant and locksmith)! Another dubious peace dividend: the old Flight 97 Restaurant in McMinnville is gone, too. In 1991, the bomber once propped above it flew off under its own power.

In front of the Damascus Fire Department, a 21 foot tall vine-covered cement pillar is really a replica of Oregon's Centennial Candle. The original, erected in real wax to honor the state's 1959 centennial, was supposed to "burn forever." It was extinguished after only 100 days when the sponsor went broke. This concrete version was cast in 1962.

It is any wonder that the next town over is Boring? Evelyn Hopp, weeding the ditch next to the Boring city limits sign, assures us that the town is anything but. "Boring was the name of the man who founded the town," corrects Evelyn, a local librarian.

Rain sputters as we arrive at the conveniently indoor Hart's Reptile World, in Canby. Mary Esther Hart lives in this long, low building together with her family of snakes, lizards and crocodiles. Visitors trip over Wilbur, a friendly crocodile, who has an unleashed run of the place. He also has his own tuxedo, and is available for parties and company picnics.

An abandoned tiger snake too venomous for any zoo is here, along with a 20 pound snapping turtle mysteriously found in local waters, that "could take a child's foot off in one bite." Live mice and rabbits are kept on hand for snake food, and the "Easter Bunny Feed" is an annual event.

1998: Wilbur the Crocodile was murdered! Toxicology reports revealed that he was killed with a poisoned chicken wing in December 1997. The same fate befell Sherman, an 88-year old tortoise in August 1997. See our report on the killer that stalks defenseless reptiles.