Long Beach, WA features three attractions: Marsh's Free Museum, the World's Largest Frying Pan, and the World's Longest Drivable Beach. Marsh's Free Museum is the home of Jake, The Alligator Man, a mummified half-man/ half-crocodile thing -- the inevitable result when people and reptiles live together? -- whose visage beckons on billboards and bumper stickers. Also on display here are several two-headed and Siamese animals, and the lifelike freeze-dried body of Morris, Marsh's longtime single-headed feline mascot, who recently passed on. Across the street, the Frying Pan hangs, reminding all of the annual Clam Festival.

The World's Longest Drivable Beach? The tow service and helpful, camera shy natives offer these tips: 1) Stay on the approach and gun it when you get near the water. 2) You might get stuck because the sand isn't normally this dry. 3) If you get stuck, the tide will come in soon and flood your car unless you get it towed right away. 4) Have $50 in cash handy in case of emergencies.

The Mt. St. Helens Visitors Center, in Silver Lake, exhibits a simulated magma chamber and chronicles Ma Nature's famous overpercolation. On film, feisty Harry Truman stays put at the base of the mountain despite warnings. Later, a ranger points to the spot where Harry resides under 300 feet of volcanic ash and mud. The best souvenir from nearby gift shoppes is the "Before and After" Mt. St. Helens salt and pepper shaker set, sculpted from ash and food-safe glaze. 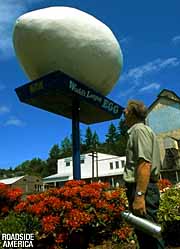 Both Winlock, Washington, and Mentone, Indiana claim ownership of the World's Largest Egg. Each has one 11 foot long. Winlock's sits atop a ten foot pole, with a nice bed of flowers beneath it.

We pause briefly at Littlerock's Mysterious Mima Mounds - a lumpy landscape stretching to the vanishing point. We quickly leave after learning from an outdoor interpretive display that scientists' best explanation isn't UFOs, Trilateralists, or pagans, but prehistoric gophers.

Tacoma's coffeepot shaped Bob's Java Jive reminds us that we have returned to the land of the midnight jitters. We drive north into the frothing caffeine inferno - straight back to Archie McPhee's, to load up on fresh radiation suits and any rubber souvenirs we couldn't find on the road.