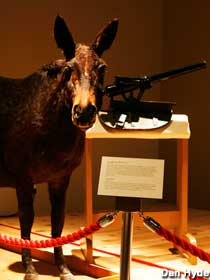 The outdoor “Cannon Walk” at Fort Sill, Oklahoma, is anchored at its west end by “Atomic Annie,” one of America’s arsenal of forward-thinking guns that fired nuclear warheads. Now Fort Sill has become the place to see two of the America’s most inventive weapons, because just down the street from Annie is the new U.S. Army Field Artillery Museum and its star exhibit (at least to us), the Mule Gun.

The gun was a 19th century experiment in animal artillery, “strapped to the back of a mule to fire,” according to museum curator Gordon Blaker. Unfortunately for the history of mobile warfare (but fortunately for mules) the gun did not work as planned. “The mule started bucking and stepped on its lanyard and fired the gun and was knocked ass over teakettle into a nearby river,” said Blaker. “That was the end of the experiment.”

The Artillery Museum will also be the home of ENIAC the world’s first computer, whose construction was bankrolled by the U.S. military to calculate shell trajectories. “It’s down at Ross Perot’s place right now,” said Blaker. (That’s the Perot Museum of Nature and Science, which is still being built in Dallas, Texas). “We let Ross borrow it and he has it for about another year.”

Blaker said that the Fort also has an atomic mortar in its collection, which he hopes to exhibit as well. That would give Fort Sill a unique triple-whammy in novelty weaponry.

We’re not certain if the mule on display at the museum is the same Test Mule that wound up in the river. That might be something to ask when you visit.

330 Randolph Rd, Fort Sill, OK
Directions:
I-44 exit 41, drive west on Sheridan Rd. Get a pass from the security center at Sheridan Gate, which is a relatively quick process. Make the first right onto Randolph Rd. Stay on Randolph Rd as it curves to the left. The museum will be on the left, next to the water tower and the outdoor cannon display, in Building 238.
Hours:
T-Sa 9-5 (Call to verify) Local health policies may affect hours and access.
Phone:
580-442-5123
Admission:
Free
RA Rates:
Worth a Detour