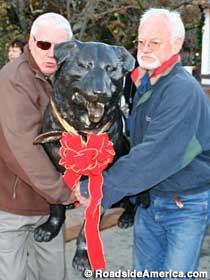 On Friday, Dec. 19, we joined a small crowd at the dedication ceremony of Sunol, California’s statue to Bosco Ramos, America’s Dog Mayor (1981-1994). This is the first “official” landmark commemorating the black Labrador/Rottweiler mix who was elected as mayor (he beat two humans), then became an internationally known symbol of freedom and democracy. Here’s our story on Mayor Bosco.

The locals gathered near the “town clock” and had a lot to say about Mayor Bosco, who’s been dead for 14 years:

“He was kind of a feeling dog. He had a rug in front of the Temple Bar. He’d take people who’d had a little too much to drink, take ’em for a walk down the railroad tracks where they’d find themselves.” 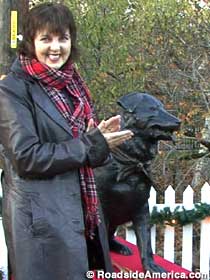 “It started as a joke, but then he turned out to be such a fine mayor.”

“He had free run of the town.”

“He’s the father of a lot of little black puppies around Sunol.”

The bronze likeness of Mayor Bosco was created by Salt Lake City artist Lena Toritch, in town for the event, and will be anchored in a more permanent base in 2009.

Actually, we arrived a little early — time enough to slip into Bosco’s Bones & Brew and snap a photo of a stuffed dog that looks sort of like Bosco. But it also pees beer when the bartender lifts up its leg. 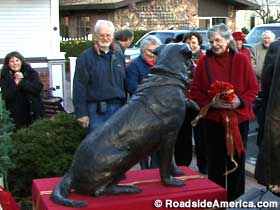 A few minutes later we were out at the town clock, chatting with folks who remember Bosco, when we heard the sound of violent retching… a guy leaning over and barfing next to a pickup truck across the street (one Bosco pint too many?).

Here’s our video of some highlights: Sunol Remembers Mayor Bosco

[Thanks to Hank Grebe for investigating Sunol with us]

More on Bosco the Dog Mayor