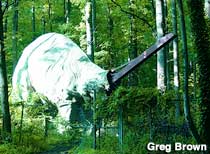 A number of tipsters have reported that Durham, NC’s old statue of a brontosaurus was decapitated early Monday morning.

In the place where the head and long neck used to be, all that remains is a steel beam sticking out of a ragged hole in the body. The dinosaur is large, 77-feet long, so the vandals seemed especially intent on destroying the local landmark.

The brontosaurus has held its head high along the wooded creek since 1967, when the adjacent Children’s Museum opened (later renamed the Museum of Life and Science). The museum is now debating what steps to take; they’d been considering fixing up the statue in conjunction with a new Dinosaur Trail scheduled to open in 2009. The decapitation probably hurts the likelihood of the preservation of the statue, which is an old-timey, inaccurate depiction of what is now called an apatosaurus. 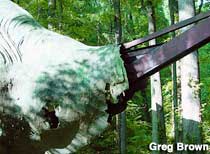 Police are investigating the crime; a private reward has been offered for information leading to the recovery of the head.

[Update: 6/3/2009 – The head has been recovered in fairly good shape by police, after getting a tip that led them to it along a road in northern Durham county.]
[Thanks to Robot Greg for the photos.]

Museum of Life and Science