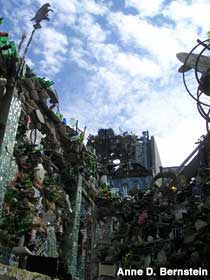 The site was once a sad vacant lot, until Zagar (who had already spent decades covering numerous area walls with his massive mosaics) decided to begin his masterwork in 1994. He spent fourteen years busily digging, building, tiling, grouting and otherwise putzing around; covering every square inch of surface with ceramic pieces, bottles, mirrors, dolls, statues, bicycle wheels and other repurposed decorative detritus. 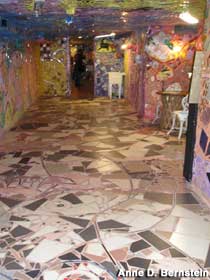 The result is more chaotic and haphazard than some other classic mosaic environments, like Chartres’ Maison Picassiette or Los Angeles’ Watt’s Towers. But Zagar (who resembles a slimmed-down hippie version of Santa) has an exuberant and unrelenting need to express himself; the result is that you can spend hour upon hour in the Magic Gardens and never stop discovering new and surprising details (Of note: tucked away amongst all the family-friendly doggies and birdies are quite a few rendering of human naughty bits and couples merrily engaged in mosaic whoopee. Oh my!). 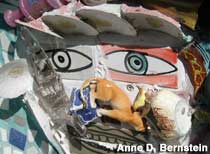 The Magic Garden was once in danger of being destroyed when the lot’s owner demanded that Zagar buy the property for $300,000. A successful fund-raising frenzy began, the amount was attained, and now The Magic Garden is an official arts organization, offering mosaic workshops and playing host to a variety of performances in situ (When I was there, a musical hipster collective clad in ironic 80s jogging garb supervised an environmental sound installation controlled by apples and vintage electronic toy controls.).

The one negative to visiting The Magic Garden? Although exposure to such constant creativity is inspiring, you might end up feeling extremely unproductive in comparison. Oh well, we can’t all be artistic tornadoes! [Post by Anne D. Bernstein]

Sections: Places Comments Off on House of Shards