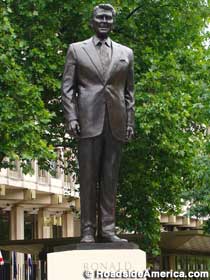 WorldTourWatch: A statue of Ronald Reagan was unveiled in London, England’s Grosvenor Square on July 4th.  The US Embassy flanks one side of the square, which also contains tributes to FDR, Ike and the victims of 9/11.

Not far away, the wax figure of George W Bush is displayed at the Madame Tussauds wax museum.

Tussauds is a much more popular destination than Grosvenor Square, and Bush will be seen by many more visitors.  But his perch is not as pleasant as Reagan’s — Bush is in a lineup with the museum’s cadre of controversial leaders.

It’s the guys who aren’t as evil as Hitler, Mugabe or Saddam, who have their own lineup, but who include Gaddafi, Castro and Arafat. 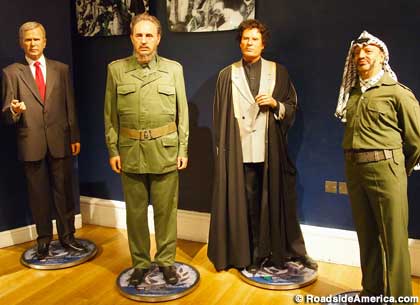 Sections: Statues, WorldTourWatch Comments Off on U.K. Loves Reagan. G.W. Bush…Not So Much