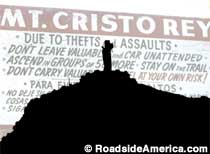 There are a handful of attractions in this country that are too remote to be casual destinations, or that frankly you’d have to be nuts to visit. But no attraction in America seems to be as much of a magnet for human assault as Mount Cristo Rey, a Catholic shrine on the U.S./Mexican border.

We’ve received conflicting tips over the years about the relative safety of this place. Now several local TV stations have reported that the shrine has been attacked again. KDBC blames “gangs from Juarez” and says that the damaged icons, once repaired, will be surrounded by bulletproof glass. KVIA says that concrete barriers will be installed as well, and adds that, “Bandits from Mexico are notorious for robbing, and in some cases assaulting, people who climb the mountain by themselves or in small groups.”

Sounds like an exciting place to take the family.

There’s no easy solution to the problem, as the shrine is part of the mountain on which it’s built. Since it can’t be moved, perhaps an answer for tourists would be to build a miniature version somewhere safer? If miniature gangs and bandits followed, they could be captured and banished to Midgetville, where — what? Oh. Never mind.