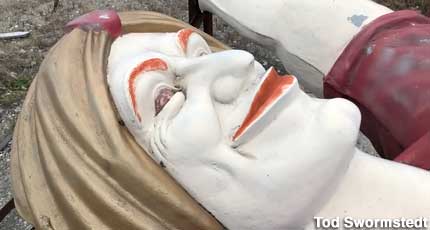 Already among the rarest of giant roadside statues, the two-faced Carpeteria Genies were in danger of becoming extinct when the California company declared bankruptcy in 1999.

Tod Swormstedt, founder of the American Sign Museum, knew it would take more than wishful thinking to save them.

“Bill Clarke, a salesman for Loren Electric Sign in Montebello, California, called to tell me that some genies were available,” said Tod. “As I recall — this was in 2003 — there were at least five, maybe as many as seven, in their yard that they had removed. Free for the taking. I picked the best two.” 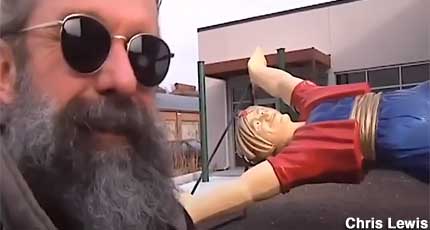 Tod had them trucked — no magic carpet available — to his museum in Cincinnati, where over $10,000 was spent to have the genies sanded, patched, and repainted to match their original colors. One was put on display inside the museum, the other lay on the grass outside the restoration shop. For years. Then the restoration company abruptly changed owners and Tod got a call on New Year’s Eve, 2009. “You have to move it or the landlord’s gonna trash it.” 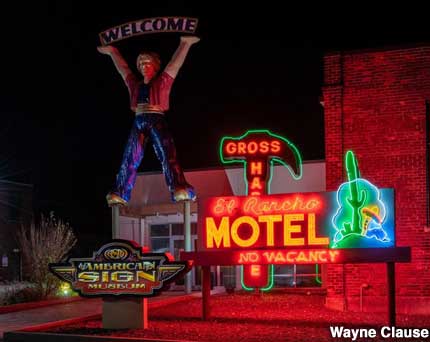 Rounding up friends and fellow sign enthusiasts, Tod hauled the 20-foot-tall genie on a sub-freezing January morning to the museum’s new, under-construction location (It eventually opened in 2012). The two-faced giant now stands above the museum entrance holding a “Welcome” sign instead of a carpet. The indoor genie from the old museum was moved to a storage lot, where it’s been ever since. “I don’t think anyone is aware that we have a second one,” said Tod, who hopes, eventually, to install the genie next to the street, so that visitors can appreciate its unique two-face design.

We asked if the museum had plans to acquire the remaining handful of Carpeteria Genies, but it sounded as if two were more than enough, even for a passionate sign guy like Tod. “They’re problematic in how big they are,” he said, “and the price has really gone up.” 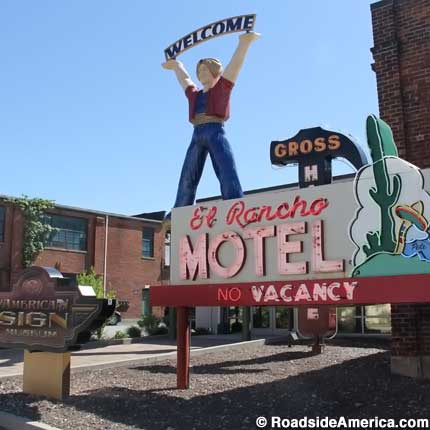