Tex Randall And PETA: No Deal

Looks like another publicity gambit by PETA — smack in the heart of the meat belt. 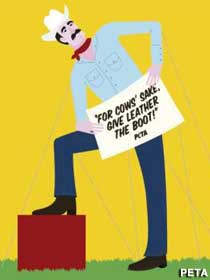 According to their press release, People for the Ethical Treatment of Animals sent a message on Nov. 10 to Danny Byrd, who owns the towering Tex Randall cowboy statue in Canyon, Texas. Tex needs repair work, and he also needs to be moved to another part of town. Danny needs $50,000 to do it. PETA offered to “lease” Tex for an undisclosed sum, which could be used to defray those costs. The catch: Tex would become a “cow-friendly cowboy” by holding a sign that read, “For Cows’ Sake: Give Leather the Boot! PETA.”

Some folks in Canyon didn’t cotton to the idea. 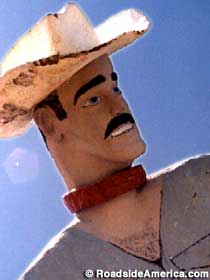 Neither did Danny, who, with leathery resolve, has reportedly rejected the offer.

Animal rights groups and tourist attractions have had rocky relationships in the past. But this media stunt by PETA smacks of opportunism. Poor Tex Randall is already hurting; branding him with an insincere repudiation of his leather-loving ways would be like taking away his beloved giant cigarette and claiming Tex quit smoking because it was bad for him.

That cigarette is gone, but in an honorable, cowboy way — blasted out of his hand by gunshots.

If PETA really wanted to help, it should lease one of the large bulls on wheels that are scattered across the country, attach it to Tex, and use it to pull the big guy to safety.

That would send a positive cow/cowboy message, and might make friends in cattle country as well.

Sections: Attraction News, Statues Comments Off on Tex Randall And PETA: No Deal