A rare triped, the three massive appendages of the Rhinelapus (ry-NEL-a-pus), each ending in a three-clawed foot, form an arch-like tripod. This trio provides great stability, and enables the creature to scuttle in any direction like a titanic spider. Its lizard-like head is slung low, beneath its body, allowing it to feed close to the ground. Its one, massive horn, jutting over two feet from the neck above its skull, is a frightening weapon. More frightening is its rear end, thrust skyward in most gaits, a sphincter of unknown power and intent.

The Rhinelapus on display in Monico, Wisconsin, is missing its right eye, and its left one resembles a red bicycle reflector -- monsters are often reported to have red, glowing eyes. The Rhinelapus of Monico has been exhibited outdoors since the early 1940s.

It was originally reported to be yellow, but this specimen has transmogrified into a uniform highway-sign-green. No one has ever lived to report a battle between a Rhinelapus and a Hodag -- the monster that lives woods around an nearby town.

Special Powers:
None are known, although a creature as unusual as this must certainly have some. That sphincter is worrisome.

What's Out There for Vacation Travelers?
The lone Rhinelapus stands under a shed in Monico Community Park. 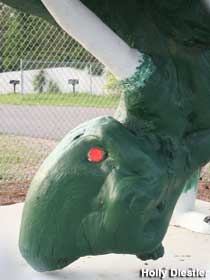