Sun rises over the misty hills of New Vrindaban, and we hate to bid farewell to the Palace of Gold. Robed Prabhupada devotees, whispering mantras, pace the palace grounds. After several quick morning photos of the huge Deity Swan Boat and a green monolithic Prabhupada statue, we take our leave.

US 250 winds through wonderful scenery as it hugs the West Virginia ridge tops, but the endless switchbacks relentlessly steal our time. We pass a place advertising a Turkey Shoot every Sunday at 1:00, with free food afterwards at the site of the first observance of Father's Day in Fairmont, West Virginia. In downtown Fairmont, an attractive, smiling policewoman escorts an attractive, laughing, and handcuffed prisoner up the main street's sidewalk and into a chiropractor's office. Going south out of town, we pass Mary Lou Retton Drive.

Back in the 1880s, an enterprising farmer named Graham Hamrick experimented with embalming fluid in an attempt to recreate the secrets of The Pharaohs. And using two cadavers from the local insane asylum, he succeeded. Although the secret formula died with Hamrick (the Smithsonian wanted to buy his mummies, but demurred when he refused to give them the formula), the well-dried fruits of his labor are still here. Two mummies, in glass-topped wooden coffins, are displayed in the Philippi Museum bathroom. You can see them for a dollar a peek.

When Hamrick died, the mummies toured Europe with P.T. Barnum. After they became passe on the circus circuit, they returned to Philippi, got lost for a few decades, were found in a barn, then were stored under the bed of a local citizen. In 1985, the town was inundated by 35 feet of flood water; the severely water-logged mummies were laid on the front lawn of the post office to dry.

As 82-year-old museum curator James Ramsey explains: "After the flood dropped, they were covered with green fungus and all kind of corruption. A man secured some kind of a mixture that would get the green mold off them and also the hairs that were growing on them." Today, air wick disks in the coffins help stave off the aromas of time.

Local residents driving by are unfazed as we carry the mummies (both are unnamed and, hard as it is to believe, unsexed) to a sunny spot in front of the museum for photos. During our visit, appreciative retirees up from Florida are shown the mummies by their friends who live nearby.

Despite the acclaim showered on the town by its most permanent residents, the mayor of Philippi has never visited the museum. And though he promised to be here to meet us, he never showed. His loss. Posing in between Philippi's number- one draw, James Ramsey basks in well-deserved glory as he spreads his arms and -- in sideshow barker style -- asks our readers: "Have You Saw The Mummies!?"

As it has all week, secular talk radio alternates its attention between health care and O.J. Simpson. Says one listener about the latter, summing up the nation's call-in sentiment, "I know he's guilty. But I'll presume him innocent."

Mummies of the Insane:

More on Mummies of the Insane

The Mother's Day Shrine is located in an old church on Main Street in the crumbling downtown of this once more-prosperous town. It commemorates the first celebration of Mother's Day, which took place here back in May of 1908 (President Wilson made it a national holiday in 1914, probably to whip up "Let's defend our mothers from the Hun" sentiments, pre-WWI.). The holiday was started by a local, Anna Jarvis, who historians say never enjoyed motherhood herself. Compared to the simple highway sign for the first Father's Day, this memorial is at least more substantial.

After perusing the nondescript grounds of the shrine, we enter the deserted main building. After a pause, an older woman sticks her head out of a door, and says nothing. Neither do we. We eyeball each other warily. She finally speaks.

"May we view the church?"

Another pause. She emerges from behind the door. "I'm not going to show you around 'til everyone of you gets here." We are all already here. We decide to make conversation.

"When do you get most of your visitors. On Mother's Day?"

"No. Hey -- where are you going? Don't you want to see the sanctuary?"

Fleeing north, we plow through the choked streets of Morgantown, where we stop and upload the day's report from the Home Health Care section of Super X Drugs. We hope no one our age sees us while we wait for the files to transfer among the ostomy products and catheters.

WMBS radio broadcasts its daily "Babies and the Weather" report, mixing notices of local live births with the forecast for their first few days on earth. We pass into Maryland, driving over the summits of Polish and Negro Mountains. Near Frostburg, we pass a sign reading "Noah's Ark Being Rebuilt Here." The McDonald's drive-thru clerk in the next town dashes our hopes with a "don't bother" shake of the head. "They've been talking about that for years. Nothing ever happens." 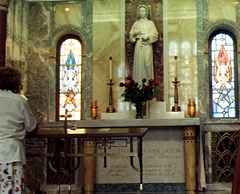 Elizabeth Ann Seton is one of three Catholic Saints in repose in the United States. At her Shrine in Emmitsburg, you can see a display of her life (converted from Episcopalian, was married with five kids, led a life of great charity), including a lock of her hair and her wedding ring. "Walk Meditatively," instructs the brochure.

The Saint's body is upstairs at the chapel, but -- unlike the Philippi mummies -- is not viewable by the general public. (Our other two Saints are Philadelphia's St. John Neumann and New York's Mother Cabrini.) Instead, in front of the wall which separates her from us, one can kneel while contemplating a small Seton bone chip which is attached to a cross.

Fortunately, the gift shop sells similarly-sized bits of the good woman in lockets for personal use and display. One might be tempted to call them "souvenirs," but they are not. Saint bones are first class relics. (Second class is some item the Saint touched or used when living. Third class relics are things touched by first class relics. We suggest breaking the glass over your first class relic, then rubbing it on your friends and loved ones, turning everyone you care about into third class relics.) St. Seton's bones are mounted on an array of colorful and sparkly backgrounds, and in four different sizes.

Note: The relic of St. Elizabeth Seton that sells for $10.00 is the same size as one containing St. John Neumann which costs $22.00. Why? Is there less of St. John Neumann to chip off? (We recall from our Day 4 visit to Enterprise Square that "Scarcity and demand equals value.") Or is it just another attempt by the power elite to downgrade the worth of women?

Now we've got to make up time and zoom past some favorite Pennsylvania stops: Gettysburg, Three Mile Island's Visitor's Center, and the Shoe House of Hallam. We've got to make Philadelphia before 5 p.m.

Evangelical radio host Bob Larson has been a constant companion across the country and as we head toward Pennsylvania, his topic is "Troopergate." On the broadcast is one of the Arkansas State Troopers who says he procured women for President Clinton when he was just governor and President-elect Clinton. After the shocking claims are made, Bob dismisses any doubt with the wise observation: "Who are you going to believe? An Arkansas state trooper or The President of the United States?"

Bob is an old Roadside favorite who started with a teen radio ministry, matching wits with high school stoners over the satanic content of rock music. He then became an expert on M.P.D. (multiple personality disorders) and was able to effect cures on the air. But someone must've slipped Bob a Rush Limbaugh pay stub, because now he's trying to bring his overtly Christian outlook to national events and an adult audience.

Current show sponsors include a brokerage company who offers to protect Bob Larson listeners from the cashless society -- "a foretaste of Revelation" -- by investing their money in certified rare coins; and Lifeline, "a values-based long distance telephone company," which donates a portion of the money it collects to support pro-life causes. "Say 'No' To Dial-A-Porn and 'Yes' to Lifeline."

On South 22nd Street in downtown Philly, inside the stately College of Physicians and Surgeons, is the Mutter Museum. It is a quiet place of brass and well-polished wood that has been around since the 19th century. It is also America's best public-is-invited repository of medical oddities.

Here on display, for example, resting in a jar, is the secret jaw tumor of Grover Cleveland. It was removed from Cleveland without the knowledge of a panicky public. In an adjacent case is a piece of Lincoln assassin John Wilkes Booth's thorax.

The body of "The Soap Lady" and her X-rays allow modern medical minds to understand why chemical properties in the soil of one graveyard turned its corpses into soap. "Soap Man" from the same graveyard is stored at The Smithsonian.

A large and well-catalogued collection of foreign items swallowed and surgically removed is presented in a bank of metal file trays. A hugely bloated colon (the "megacolon") is displayed like a bloated "Dune" sand worm ready to strike. In one case, an alabaster replica of famous Siamese twins Chang and Eng stands above their actual connected liver, which floats in a pan of formaldehyde. (We learn that Chang and Eng each had many children, and a Chang and Eng family reunion for their 125+ direct descendants is planned)

While the classic displays are always up, the museum keeps changing its ancillary exhibits. New this year is the second floor's lobotomy display -- showing a history of psychosurgery -- with photos and implements from the crude hammer and chisel-style of the thirties to the newer, more precise ice pick-style of the fifties.

We started with a view of the Pacific ocean, and now we stream toward the Atlantic to log our 4,000th mile and our 50th attraction, a confluence of milestones leading us to only one spot:

In a storefront in the run-down shore town of Keansburg is the Wheel of Food. Actually, several establishments offer the opportunity to play this gambling-for-groceries game. Hungry gamers put a dime down, the barker spins the wheel, and if you match -- Bingo! -- you win a Twookie Candy Bar or a can of generic cola. Or, you can save your winning chit and play again. Save 19 chits and earn a Hungry Man frozen dinner. Play and win 50 times: Take home a canned ham! Many lucky locals do their weekly shopping here the fun way. We recommend the same thing to vacationers.

Nearby, the ocean laps gently as we wolf Twookies. We've run out of land, film and clean underwear. Our Hypertour '94 has drawn to a close.

Now yours can begin! Don't just settle for downloading "Hula Girl" or "Once Nude" GIFs -- get off of your butt, gas up and go! There's light at the end of the carpal tunnel. Drive! Drive! Join the believers at Enterprise Square, Precious Moments and the Palace of Gold! Storm the Mother's Day Shrine. Attack, zombie army, attack!

And don't forget to send a postcard.