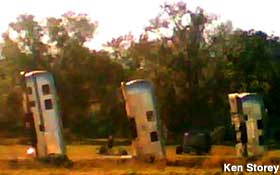 On March 14, 2008, Frank Bates went before the Hillsborough County Code Enforcement Board to plead his case for the preservation of Airstream Ranch. The collection of eight old Airstream trailers along I-4 east of Tampa, Florida, set on end in the ground like prehistoric megaliths, had drawn widespread attention since it was erected in January.

The trailer array drew complaints from at least a few neighbors, and hadn’t gone through any official approval process by the county. But the RV-Henge as was praised by many others as a work of roadside art.

Bates gave what he described to us as “a beautiful presentation,” complete with endorsements from the president of the Ringling College of Art and Design, the dean of the University of South Florida College of Visual and Performing Arts, and even the director of the Arts Council of Hillsborough County. He also presented a petition signed by 4,000 supporters, and letters of endorsement from experts in the field of roadside attractions.

The Board voted against Frank Bates, 6-0.

“A lawyer friend told me, ‘”Frank, you were done even before you started,'” Bates said. “‘They wanted these down. You were not gonna win.'”

Bates now has until April 15 to tear down Airstream Ranch, or pay $100 a day in fines.

“There was about 20 kids that came to the meeting from Tampa Technical High School,” Frank said. “They had worked out a design for all the landscaping. I felt worse for them than I did for me. I think it was their first taste of how government doesn’t work some time.”

In the days immediately following the decision, Bates came up with the idea of getting the Airstream Ranch property rezoned from agricultural to commercial, with the trailers classified as a “sign.” But then his attorney told him that the trailers were too big to qualify as a sign. Frank then thought to put the trailers ON trailers and license them, and hide the supporting trailers with landscaping. ” But the lawyers said no. On agricultural land you cannot have a trailer unless you are living on the property.”

“They just don’t understand,” Frank said of the Board. “A lot of people do understand, and I’m amazed by how many people are on our side. But what are you gonna do?”