“Which taxidermy wonder would you travel farthest to see?”

We couldn’t present America’s full breadth of stuffed dead exhibits, so we chose a tiny sampling of more common oddities, and a few true rarities. 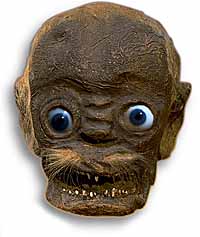 Perhaps not surprisingly, more than a quarter of respondents will not go out of their way to see the hides of dead creatures wrapped around stuffing and frames and sewed into comical poses. 25.8% of them think it’s “Disgusting!”

However, mutation triumphed in the end. The Merman/Fiji Mermaid, owing some clout, no doubt, to its P. T. Barnum pedigree, garnered 31% of the vote.

Chipmunks Play Cards found 13.8% of respondents ready to gamble part of a road trip to see them in their various under-hyped locations. White Squirrels Shoot Hoops grabbed 13% of interest, though it’s hard to discern whether it’s because of the rarity of seeing all-white creatures starring in this sport. 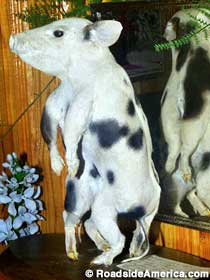 The 8-legged pig found a following among 10% of respondents. Good thing that it’s not more popular, because we can’t tell you exactly where that porcine spider scuttled to after the Thunderbird Museum, Hatfield, WI closed a decade ago.

Is the detour appeal of the 2-headed calf seriously waning? Seems so, since only 6% of voters would go the extra mile to see one (vs. the other oddities). Perhaps the 2-headed calf is the Starbucks of the Freak Animal World, too readily available at every half-baked county museum and truck stop. And in an age of Octomoms, is two heads even noteworthy?